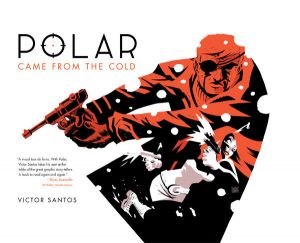 Danish star Mads Mikkelsen (Hannibal, Doctor Strange) has been cast in the lead role of Duncan Vizla AKA The Black Kaiser in an adaptation of the noir graphic novel Polar: Came from the Cold. The graphic novel is famous for its stylised design and complete lack of dialogue, so it will be interesting to see if the film adapts this characterisation. Dark Horse Comics published the novels with added speech bubbles, so we don’t expect to be treated to a silent, stylish feature. Although, it would have been interesting indeed.

In the novels, The Black Kaiser is the world’s top assassin and just as he’s on the brink of retirement, he is pulled back in against his will. It sounds like the basis for many action films, but with Mikkelsen in the lead, we can’t be anything but excited.

Polar will additionally star Vanessa Hudgens, Katheryn Winnick and Matt Lucas. The film will be directed by Jonas Akerlun (Lords of Chaos), who directs a script written by Silent Night’s Jayson Rothwell.