Good help is so hard to find these days, especially for Diana Prieto (Daniela Ramírez), who is raising her severely autistic son Martin (Matías Bassi) while pregnant with her second child, and her husband Tomás (Cristobal Tapia Montt) is frequently away on work trips. A chance encounter leads Diana to hire a Filipina woman named Luz (Aida) to take care of the house and Martin, and Luz seems to have a magic touch with the boy, calming his erratic, violent behavior. Soon, however, Diana becomes suspicious of what seems to be a too-close relationship between Luz and Martin, and she comes to believe the new nanny is developing a sinister influence over the boy—particularly when she starts uncovering voodoo-esque totems around the house. 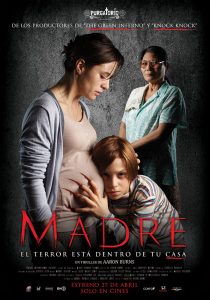 Taking inspiration from ROSEMARY’S BABY and thrillers like THE HAND THAT ROCKS THE CRADLE in which the protagonists let people they barely know close to their families, Aaron Burns makes his genre writing/directing debut on MADRE, following his 2011 comedy BLACKTINO. The son of producer Elizabeth Avellán from before she married filmmaker Robert Rodriguez, Burns got his start at Rodriguez’s Troublemaker Studios, working on the visual effects of films like GRINDHOUSE, SIN CITY and MACHETE. He then hooked up with South American director Nicolás López and producer Miguel Asensio and joined them on their “Chilewood” collaborations with Eli Roth, taking acting roles in Roth’s THE GREEN INFERNO (on which he was also 2nd-unit director and a VFX artist) and KNOCK KNOCK and Guillermo Amoedo’s THE STRANGER.

These films were all shot in English, and MADRE, which López and Asensio produced, was initially intended to follow suit, but Burns eventually decided to do it in Spanish (and Tagalog, which Luz uses to communicate with Martin, while neither Diana nor the audience is let in on what she’s saying). The foreign language didn’t stop Netflix from snapping up streaming rights to the movie just prior to its premiere at SXSW this past March. SCREAM recently spoke to Burns about his domestic creeper, and how an American filmmaker wound up plying his trade in Chile.

SCREAM: How did you become involved with the Chilewood team?

AARON BURNS: I’m from Austin, Texas, so when I was in high school, I started going to SXSW to watch movies. Back in 2005, Nicolás López and Miguel Asensio had a movie there called PROMEDIO ROJO, and I went up to them and introduced myself. I was just some pimply-faced kid who wanted to make movies, and they were laughing at me because my Spanish was terrible! Eventually, I started working at Troublemaker Studios, and Nicolás and Miguel came back to Austin because they wanted to do visual effects there for a film they were making called SANTOS, and they ended up doing that at Troublemaker. I took the lead on that movie and became very good friends with them, and that’s how I came to make movies in Chile. We’ve been collaborating ever since.

I first moved down there when they did AFTERSHOCK with Eli Roth, whom I had met on GRINDHOUSE. So I’ve known him for a decade now too—it’s crazy when you think about it. During AFTERSHOCK, we became really tight, and when it came time to make GREEN INFERNO, he jokingly cast me as the guy who’s in love with Justine [Lorenza Izzo, Roth’s girlfriend at the time and later his wife] and is horribly eaten by cannibals.

I gather your Spanish has gotten better since those early days at SXSW!

Yes, “es spectacular”, as my partner would put it. My Spanish is definitely great now, and I work mostly in that language. I spend about 95 percent of my time either speaking or hearing Spanish while living in Chile. Right now, I’m actually thinking in Spanish about how to say the words I need to in English for this conversation to work!

How did MADRE get going? Was it simply a matter of bringing the script to the Chilewood team?

Yeah, because they’ve been making fun of me for years, because I hadn’t directed a movie since 2011. They were cracking all kinds of jokes about how I was a fake director, and every time I’d tell people I’d directed a movie, they would roll their eyes. That was one of the main reasons I started writing this script, because the ribbing was getting to be too much! I drew on all the experience I’d gained over the previous six years of acting, working with Eli and my other mentors, just getting my maturity and my experience level up, to come back to directing strong.

Most of the Chilewood horror movies have been extreme and unrestrained, and MADRE is more of a mood piece. Were you intentionally going against the grain with that approach?

Yeah, because there’s certain shit that scares me, and a lot of it doesn’t involve gore. I’m not a mystical person, so I don’t believe in ghosts and monsters and ghouls and vampires or any of that stuff, and it doesn’t scare me at all. I know it works box-office-wise, but what has always frightened me is real people doing real shit to other people. That’s the kind of stuff that haunts me.

With MADRE, I was entering a new genre. My first movie, BLACKTINO, was kind of like a John Hughes film—a high-school comedy with a half-black, half-Hispanic kid, a completely different kind of experience than going into horror. So I felt I had to be a little more authentic to myself in order to make a scary movie that would creep people out. I don’t think I could have pulled off a traditional horror movie; I probably could now, but I wanted to make sure that I was giving it my full effort in order to freak out audiences.

So I went with something that has a lot more subtlety, because not many people have had experiences with ghosts haunting their house or with monsters or demons. Everyone has had an experience with someone lying to them, though, or manipulating them or taking advantage of them, or conning them into doing something they didn’t want to do. That rings truer to me, and telling a story like that was better for me as a first try. Now that I understand the pacing and the beats of the genre, I can go do something else, but starting out, I went for a film that’s not so in-your-face, and doesn’t rely on a lot of flashy effects or blood and gore, but is just as effective, because your mind can make up that stuff for you. A lot of really unpleasant things happen in MADRE, but I didn’t want them to be the focus of the movie, because the actors take centre stage so well, and I wanted to highlight them.

When it came to Martin, the autistic boy, what went into making his character authentic, and how did you find the right young actor to play him?

I have autism in my family, and I’ve known a lot of autistic children. When I was in elementary school and high school, we always had special-needs classes. They would bring those kids around, and they would have activities for all of us, so we would interact with them and make friends with them, take care of them, hang out with them. So it was always around me, even though their autism wasn’t as severe as what you see in the movie.

So when we cast Martin, we had to find the right kid, and we discovered this great actor named Matías Bassi, who was a total pro. I’ve worked with a lot of kids on movies, and I don’t think I’ve ever seen someone that age be such a professional. He would just show up every morning with a smile on his face, ready to go, super-happy. He never complained one minute, and he nailed every frame, and we were super-happy with his performance. It was a very delicate issue, but we had him watch documentaries and YouTube videos of kids who were similar to one we wanted him to portray in MADRE, and he did a very good job.

When Luz speaks Tagalog, that dialogue isn’t subtitled; is that intended to reflect the experience of Diana, who can’t understand what this woman is saying to her child?

Exactly; I wanted the viewer to be in the exact same position as Diana is. It was fun to play with that; we tested it both ways with two different audiences, and people felt it was a lot more mysterious when they didn’t know what was going on with Luz’s plan. I actually had a Filipino man come up to me after the first screening and ask, “Why didn’t you have subtitles for those scenes?” and I was like, “Well, you could understand what other people didn’t understand, and you have special knowledge the main character doesn’t have, and most of the audience won’t have,” and he was like, “Oh, that’s cool, I like that.”

What are the advantages of making movies in Chile?

Well, here’s the thing. We in Chile have a complete infrastructure; we have all the things we need in order to make movies. The idea we have been striving for forever is that we want to be able to do everything, so we can have an idea and take it all the way through to a DCP for the final production screening. Everything’s in-house; we can do all our sound in-house, all of our music in-house, all of our colour, all of our digital effects, all of our editing. We shoot everything, we have all the camera equipment. It’s just like a studio. Otherwise, you have to take money from somebody else who’s not creative or they don’t know what they’re doing or whatever, and it’s like, “Oh, dude, it’s a great script, we really love it, but the money will be coming through in eight months.” It’s like, “Dude, I don’t want to wait eight months, I want to make the fucking movie right now,” you know?

So when it comes to Nicolás and Miguel, they’re very much on the page of “Let’s do it now,” instead of waiting. Obviously it worked out for us, because we got the Netflix sale. That has always been our game—not waiting, let’s just start shooting. We make five films a year, and Nicolás is constantly directing something; he’s got three scripts right now that he’s putting into production for next year. It’s all about just making movies and worrying about the other stuff later. It works kind of like a startup incubator, where we tell the story in a small capacity in Chile, cheaper, and the key to it is the story—and if it works, then hey, you can sell the remake rights all over the world. We’re very happy with the stuff we’re making, and excited about the future.

Thanks for talking to SCREAM, Aaron.