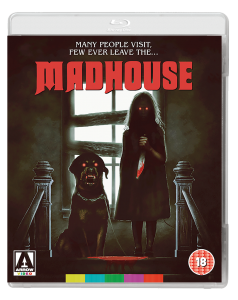 If – like I initially did – you think you are going to enjoy a remastered edition of Vincent Price’s 70’s camp classic Madhouse, I have to warn you, you’re not. This unnecessarily gratuitous slasherthon, leaves much to be desired, and should probably only be sought out if you are determined to complete your viewing checklist of questionable 80’s horror flicks. Right, having given you suffice warning, I feel I can continue without any undue feelings of guilt.

It’s her birthday. The mentally unhinged Mary (Allison Biggers) has escaped from the hospital where she has been kept, in isolation, since childhood. With revenge on her mind, she travels to the home of her twin sister Julia (Trish Everly), intending to make this year’s anniversary a night to remember.

It’s almost impossible to discuss Egyptian director / writer / producer Ovidio G. Assonitis’ 1981 slice ’n’ dice chiller, with any great profundity, mainly because very little actually happens during its ninety two minute running time. Other than a few mandatory shocks and the occasional elongated chase sequence, the film amounts to little more than various characters ending up dead after arriving at Julia’s home, which is divided into various apartments that are undergoing renovations.

That’s not to say Assonitis hasn’t attempted to introduce – both through the story and by the way it’s brought to the screen – some sense of depth and style. The story thread of Mary and Julia’s childhood and how it has shaped their ongoing relationship, is an interesting attempt to lift the film above your average run-of-the-mill slasher. You then have the introduction of individuals who may, or may not, be all they seem, which provides the film with the opportunity for a twist during the climax – when it’s revealed that there is actually more than one looney in the house.

Visually the finale of Dario Argento’s 1977 masterpiece Suspiria is alluded to during the opening scenes when Julia is visiting Mary in hospital, whilst the protracted finale bares more than a passing resemblance to that of the far superior contemporary frightfest Happy Birthday to Me (1981). The setting of the dilapidated house also provides plenty of potential opportunity for what could have been some original gruesomeness. 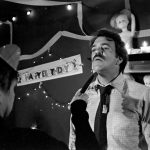 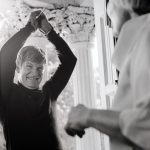 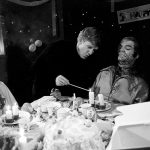 Which is where the real problem with Madhouse lies. Despite potential, the end result amounts to little more than a collection of wasted opportunities, connected by bouts of no-holds-barred, visceral violence. Assonitis could have produced a moody and creepy thriller, with some subtle nastiness thrown in to add spice. Instead he succumbs to the feeling that pervaded many horror films of the period – the jettisoning of restraint in favour of drawn-out, gratuitousness which leaves nothing the imagination, and is much the poorer for it.