It’s no surprise to anyone that took 10th grade English that Frankenstein is a literary classic. A seminal work of gothic horror, the book went on to inspire comics, movies, plays, music, and made Frankenstein’s monster a go-to creature when a quick scare (or a quick buck) is needed. Made Men, a yet another spin-off the book, extends from the Frankenstein family tree and brings the good doctors descendants to modern times. But instead of doing a reinterpretation of the classic story as many have done before, Made Men creates a new tale for the great-granddaughter who is forced to use her immortality for sweet, sweet revenge.

One thing to keep in mind when reading Frankenstein inspired works is that Frankenstein is no longer a character or a story, it’s now a genre. With no copyright, the bolt-necked monster, like his contemporary Dracula, has fallen in to public domain which allows for creators to be unlimited in the creature’s possibilities. Made Men #1 does just that. As stated, the story focuses on the descendent of the original Dr. Frankenstein, a descendent who attributes a majority of his great deeds to his sister Cecilia. Her knowledge of immortality was passed down to her granddaughter Jutte Shelley who uses her ‘health potion’ to survive a trap laid out for her and her police squad. But that doesn’t mean she’s one to easily forget and that night starts a rage-fuelled revenge that won’t stop until those who ordered the hit are dead in the ground.

Made Men is a pretty straightforward comic with the twist being that the lead is near immortal and her second crew, the Made Men, are some sort of monsters. The first issue doesn’t veer off the tried-and-true path of Kill Bill and instead works on establishing Jutte’s background in a series of flashbacks as she puts her plan into action. It’s not exactly attention-grabbing but it does manage to promise a good pay-off if the reader continues on to the second issue. We get a quick display of her powers and there’s some sort of lion-man-creature in there, so that’s pretty rad. 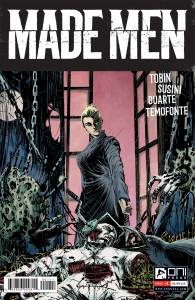 On a side note, it’s interesting that the author Paul Tobin fixated on a sister of Dr. Frankenstein who was forced to give credit to her brother because of her gender. In real events, Mary Shelley originally released Frankenstein under Anonymous to improve her odds of getting published, something that her gender would’ve prevented her from doing. Though successfully received, once she made her name public, every flaw in the book was criticised as a result of her being a woman. Whether it was intentional or not by Tobin, it’s hard not to draw this parallel between the two women.

Arjuna Susini’s art is a good fit for the project. While not particularly outstanding, it’s not anatomically flawed and doesn’t get jumbled up in the movement panels. The lack of inking and the use of soft penciling is reminiscent of Michael Allred (Silver Surfer, Madman) but lacks the overt sixties poster art style that makes Allred works so unique. Still, it works well with the script and doesn’t go easy on the gore. All in all, Made Men is a good in-between read, like the fourth comic in the stack type of deal, but probably won’t be winning any horror awards. Nevertheless, on a slow comic day, it’s a fun little addition to the collection.