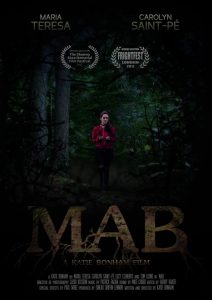 Synopsis:
Rosie (Maria-Teresa Daher-Cusack), a young girl living with her mother Kris (Lucy Clements), is dealing with her own teenage angst and troublesome relationship with her boyfriend. When asked to hand-deliver a care package to Mab (Carolyn Saint-Pé), a woman living in the remote wilderness, her curiosity gets the better of her and she sets off a chain of events that will affect the rest of her life.

Ever since she debuted her first short, The Porcelain Ground, independent filmmaker Katie Bonham has been working hard to build her career. Her next three shorts, Doll, The Paper Round and Mindless, not only received critical praise but they continued to wow festival audiences around the world helping her to cement her right to claim as one of the UK’s hottest up and coming female directors. So, when I had the opportunity to see her latest short during FrightFest, I jumped at the chance to see Mab and I’m pleased to confirm that I did not leave feeling disappointed.

From the outset, the story is deep-rooted in magical realism and this provides a playground for Bonham, who whilst taking pride in applying her keen eye for detail, lovingly brings her pseudo gothic tale to life. With finesse, Mab offers audiences a solid story, a unique mythology, incredible set designs and stunning cinematography. It pleases me that Bonham’s ability to tell a story is getting stronger with each film she makes.

Mab’s narrative structure is well thought out and under Bonham’s direction, the film holds the attention of the audience by maintaining its own sense of mystery. Never one to pander to her audience, Bonham’s storytelling technique takes audiences on a ride that celebrates everything right about independent filmmaking. The cast is equally as sound but it is Daher-Cusack’s performance of Rosie that keeps the film anchored in reality giving a greater impact in the final act when all is revealed.

I do fear that Mab may not stand to repeated viewings but that is not a bad thing by any means. The short itself provides a fully coherent story and enjoyable watch that should be enjoyed by a much wider audience. It is for this reason that I give Mab two glowing thumbs up but I hope after having five shorts under her belt, Bonham will turn her hand to deliver a feature in the near future.