I’m hoping your day is in need of something batshit fucking nuts, ‘cause this poster has just landed for Lycanimator, and with that title and this artwork, we’re surely in for something a little out of the ordinary. 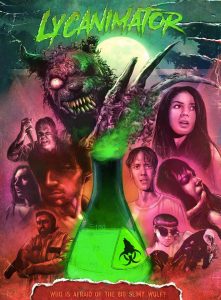 The film follows a group of pals who visit an abandoned house, unexpectedly finding it occupied by a mad scientist with some monster-making goop. When one of the friends comes into contact with said goop, they transform into a hungry, lustful beast and from there out, everyone’s in trouble.

Lycanimator will have its world premiere on April 28th at London, Ontario’s Shock Stock festival.