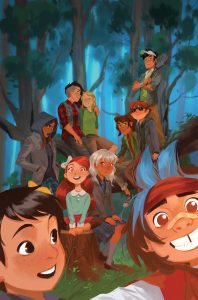 In a market still heavily dominated by male characters and creators, Lumberjanes/Gotham Academy #1 – the new crossover title from DC and Boom! Box – is something of a revelation, dispelling the tired misogyny and objectification that are still so central to comics today. The characters here are all bright and dynamic, even for readers who are new to both franchises, and the fact that the book is both LGBT-friendly and aimed at a younger audience make this comic far more exciting than a lot of other mainstream titles.

Although Lumberjanes/Gotham Academy #1 has more central characters than a George R. R. Martin novel, the story is remarkably easy to follow. When camp scout-master Rosie gets lost in the woods (pursued by cloaked figures with animal skulls for heads), the rest of the Lumberjanes set out on a rescue mission to find out what’s been going on. Over in Gotham Academy, the disappearance of Olive’s literature professor lead the team to the same forest, and before long, the two teams are fighting evil side-by-side. Though both comics are markedly different in tone, Chynna Clugston Flores weaves them together masterfully, staying true to both books whilst making something new in the process. It’s not easy to juggle so many characters and make each one seem vital to the narrative, but Flores appears to do this with ease, giving each one an individual voice from the very first page.

The comic is also filled with pop-culture references – from Friday the 13th to Rocky and Bullwinkle – and the dialogue is equally sharp, laced with some clever wordplay and groan-inducing puns. This has the potential to turn off fans of more conventional horror stories, yet the book is so wittily written that it’s hard to criticise in terms of style, tone and narrative voice. Basically, this is the comic I wish I had read at fifteen.

Artist Rosemary Valero-O’Connell does an impressive job illustrating such distinctive characters. Though the style of art is as loud and cheerful as a Sunday morning cartoon, there are some suitably creepy moments – particularly the reveal of the skull headed antagonists in the second half of the comic. Whitney Cogar’s colours also deserve a special mention as they are beautifully done throughout. The transition from the golden, sunlit exteriors of Gotham Academy to the cold blues and blacks of the woods is so reflective of the shift in tone, slowly influencing the character’s thoughts and feelings without ever saying a word. 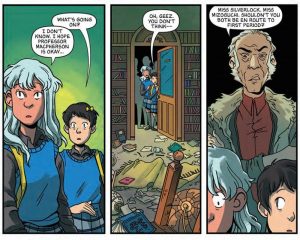 Lumberjanes/Gotham Academy is a crossover I was initially sceptical about. Besides having strong, female protagonists, I couldn’t really see what either had common, though my fears were all allayed by the end of issue #1. This is a comic that is fun, engaging and beautifully written, showing how powerful a simplistic narrative can be when done well. If you’re a fan of teen-friendly horror stories, do yourself a favour and pick this one up. They really don’t get much better than this.