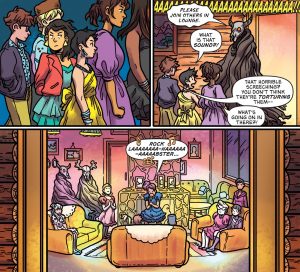 If you mix Stranger Things, Sleepaway Camp and the greatest hits of Cyndi Lauper, you’d probably end up with something pretty close to the new issue of Lumberjanes/Gotham Academy. The crossover – a collaboration between DC and Boom! Box – has been consistently effective since it began a few months ago, but Issue #3 is the strongest yet, weaving the disparate story threads together to make a satisfying whole.

Issue #3 begins in the immediate aftermath of Issue #2, with Jen and Olive still trapped in the nightmarish cabin in the woods. But it’s not long before the other team members join them, desperate to get away from the snakes, bats and spiders that stalk them outside. This is where the series really starts to come into its own, weaving together a strange, Miss Havisham-esque tale that lies at the very heart of the story. 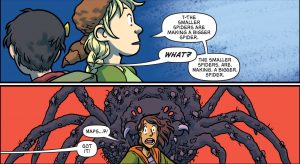 But if Issue #3 is much darker and creepier than the previous issues, then it’s also much funnier too. While recalcitrant party-goers meet an undoubtedly grisly fate, birthday girl Louise subjects her guests to an equally painful round of karaoke. References to the B52s and Nena’s 99 Luftballons keep the tone deliciously wry, and the expressions of those forced to watch are a real highlight of the comic.

Yet it’s Louise’s backstory that provides the emotional centre of the book, lending the comic a certain gravitas that wasn’t always present in the first two issues. Although it’s easy to read Olive’s reaction to the story as both saccharine and twee, it’s precisely this scene that elevates the comic into something even more profound than it was before. Lumberjanes and Gotham Academy are, at their hearts, about tolerance and friendship, and it’s good to see these themes form the cornerstone of this crossover as well. 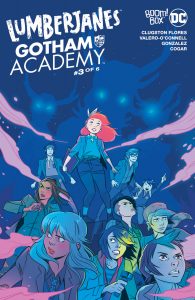 Once again, Vallero-O’Connell’s art is beautiful throughout, especially when it comes to the characters, all of whom are equally expressive and dynamic. Whitney Cogar’s colours are another high point of the comic. The way they range from warm reds and oranges inside the cabin to the aching blues and purples of the woods is masterfully done, with the austere blacks of the spectral figures providing a grim, supernatural aspect.

I really enjoyed the first two issues of Lumberjanes/Gotham Academy, but Issue #3 is the strongest yet, putting all of the pieces in place for the final three editions. Louise’s story proves that not everything is as it seems, and there are still a lot of questions left unanswered, particularly when it comes to the skull-headed figures that haunt the pages like ghosts. Issue #3 is a testament to the fact that horror needn’t be gory or gratuitous to be effective, and that gripping characters are still the most indispensible part of the genre. If all horror comics were as fun, well-paced and meaningful as this one, I would be a very happy reviewer indeed.