For my money, Lucky McKee sits right in the top tier of 21st Century horror directors. Introducing himself in fine style with 2002’s goth Frankenstein fable May, he has since gifted us with the likes of All Cheerleaders Die, lo-fi revenger Red and one of this century’s very best horror flicks, The Woman. Stepping out of the director’s chair, McKee will be producing Don’t Look There, a serial killer mystery set to begin shooting this winter.

Below is the early poster art for the film, which Richard Zelniker (As Night Comes) will direct. Zelniker also produces with McKee, Patrick Hughes (Picture This) and Warren Zide (Final Destination series). Here’s the official synopsis:

Don’t Look There is a mystery/thriller about a clinical psychologist who’s on a downward spiral as she treats a new patient that suffers from premonitions. As their sessions deepen, a detective solicits her help in hunting down an elusive serial killer terrorizing Detroit during the holiday season. 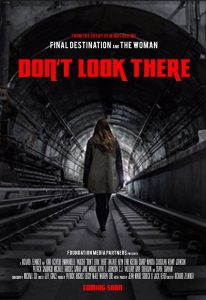