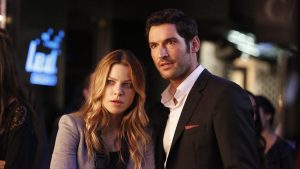 There have been a lot of cancelled TV shows of late, but Lucifer is not going to be one of them. Despite the show being cancelled on FOX, the show will go on over at Netflix because the streaming service will release Season 4.

The new season will consist of 10 episodes, so not quite as many as we’ve come to get used to, but 10 is better than 0. They will, however, be of similar runtime length to the episodes on FOX.

When speaking about the plan for season 4 over at Netflix, showrunner Joe Henderson has offered the following information about the so-called bonus episodes that recently aired:

“The first thing we’ve got to figure out is where the one that wasn’t a complete standalone, the Ella-focused episode, might fit.”

The new 10-episodes will reportedly focus on the first half of the arc that was originally planned on Fox, Ildy Modrovich expands: “We were going to have two parts to it anyway, so we’ll just tell a really strong, gnarly first part.”

It’s not confirmed when production will begin or when the season will hit Netflix, but we do know that it is happening and that’s the most important thing.

Lucifer stars Tom Ellis in the title role of Lucifer Morningstar and follows his exploits in Los Angeles – the City of Angels.