Last Christmas, Gigi Saul Guerrero and her LuchaGore cohorts caught Saint Nick on tape getting inventive after way too many years giving nothing but lousy lumps of coal to misbehaving kids around the world.

Having captured footage of Santa in his grotesque grotto, Gigi and co. decided to join forces with Crypt TV and head off in search of another folkloric figure, the Easter Bunny. Searching high and low, they eventually discovered his whereabouts in the bowels of the earth although I’m not sure they expected to catch him in such a tight squeeze…

We’ll leave you with a little ditty from the LuchaGore team, and you can enjoy the short after the jump. 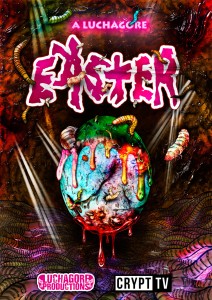 “There’s a Sunday in Spring full of wonder and magic,
But we tell a story that can seem quite tragic.
The children all search for the Easter Bunny’s eggs,
But they would be sickened, if they knew how they were made.”

Warning: NSFTWH (Not Suitable For Those With Hemorrhoids)