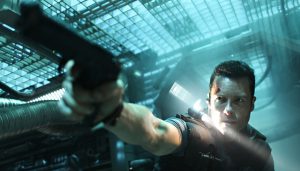 John Carpenter has won his plagiarism lawsuit against Luc Besson, in a landmark decision by a French court. The focus of the suit was Besson’s 2012 actioner Lockout, which was ruled to have copied key plot points from Carpenter’s 1981 Kurt Russell-starring classic Escape From New York. Besson has been ordered to pay the Horror Master over half a million dollars in damages.

Lockout takes place in a dystopian future and stars Guy Pearce as Snow, a wrongfully convicted man offered his freedom by the government if he can rescue the president’s kidnapped daughter from the violent inmates at a maximum-security space jail.

Escape From New York, as you’re no doubt aware, stars Russell as wrongfully convicted man Snake Plissken who, in a dystopian future, is offered his freedom by the government if he can rescue the kidnapped president from the violent inmates at a maximum-security jail on Manhattan. If you spotted the key difference there, then Carpenter’s 1996 sequel Escape From LA closes the gap, with Plissken rescuing the president’s daughter.

The suit was brought jointly by Carpenter, Escape co-writer Nick Castle and rights holder Studio Canal. A court originally ruled against Besson in autumn last year, when the Leon director was ordered to pay $95,000. Besson appealed against the decision however, but ended up seeing not just the decision upheld, but the fine increased substantially.

With plagiarism a notoriously difficult charge to prove in court, such cases very rarely end in a prosecution and thus, this is an unusual case indeed. Could a precedent have been set here? If so, then George Romero should surely have a heap of riches owed to him.