It’s difficult to rate a work of fiction that has multiple contributors. The Lovecraft Squad—Waiting is the brainchild of esteemed editor Stephen Jones. Jones conceived a premise in which a law enforcement agency, the Human Protection League, acronym HPL, polices Lovecraftian supernatural activity. This covert division of the FBI is also known simply as The Lovecraft Squad. The initial foray into this universe was the novel The Lovecraft Squad—All Hallows Horror, written by John Llewellyn Probert. For the sophomore follow-up, the history of The Lovecraft Squad, from the 1920s to 1970s, is examined. Bracketed by a prologue that introduces us to Lovecraft’s kindred, and an epilogue which sets the stage for the next book in the series, the “chapters” of the tome are essentially short stories written by various writers. Some are quite brilliant, and others are rather disappointing. To accentuate the positive, let’s have a look at the most impressive narratives.

The ingenuous prologue entitled “Howard’s Way” is fabulous in dual senses of the word: Writer Angela Slatter’s concoction is full of fictitious/fabulous elements used in explication of author H.P. Lovecraft’s formative years, and she integrates them most fabulously into the intro.

“Shadows Over Innsmouth” by Brian Hodge comes after Slatter’s contribution. Hodge’s descriptive prowess is beautifully displayed in this passage: “Dobbs had been in fishing villages and harbor towns before, on both sides of the Atlantic. Over here and over there, the all smelled more or less the same. The air, their very essence, was saturated with the ancient scents of fish and briny water, and the boreal forest smell of wood so wet it might never be truly dry. All of that was here…but underneath was something else, something foul, a sour, living odor, like the musk of some predator that hid itself in the trees or tall grass until it was time to pounce.”

Reggie Oliver provides two stories/chapters. In “Ec’h-pi-el” (sound it out) author H.P. Lovecraft works with the Human Protection League, which is run by J. Edgar Hoover. Lovecraft embraces his role with gusto: “And, after all, I am a patriot and my respect for that great American Mr. J. Edgar Hoover knows no bounds. It would seem that I am to become an ex-officio G-Man!” Writer Oliver has great fun skewering the ideologies and intolerances of both Hoover and Lovecraft.

There is more social satire in Oliver’s other yarn, “The Armies of the Night,” but there are chilling images, as well. In a scene after an agent and Lovecraft have nicked Miskatonic University’s copy of the grimoire The Necronomicon, they are followed by a frightening entity: “It was roughly human in shape and monstrously tall. The head, like the body, was featureless and entirely composed of what looked like scraps of paper or parchment on which signs and sigils had been inscribed. The thing was forever shifting and turning as if a whirl of wind were keeping it in shape. On in came rustling dreadfully and intent on some nameless harm.”

“The Stuff That Dreams Are Made Of” by Peter Atkins is basically a Lovecraftian riff on Dashiell Hammett’s The Maltese Falcon. Clever and amusing, it contains images that will appeal to horror fans: “It looked like something had clawed its way out of him, something powerful and frenzied. Like someone had force-fed him a mountain lion and then whistled it to come home.” 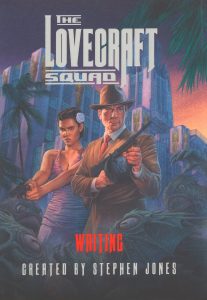 Another variation on a genre theme is evident in Thana Niveau’s “Arkham House on Haunted Hill.” Niveau uses the template of Shirley Jackson’s novel The Haunting of Hill House, and gives it a Lovecraftian spin. Four individuals are investigating Iverson House, reputedly the most haunted abode in New England, and possibly in the U.S.A. Like Jackson’s respected book, Niveau’s tale opens with a fine depiction of the house’s menacing aspect: “Iverson House was a hideous sight, even from a distance. It squatted on the misshapen hill like a huge malevolent toad, looming over the town of Arkham below, gray against an even grayer sky.” Niveau splendidly plays upon established haunted house motifs.

The Lovecraft Squad—Waiting, is recommended with a caveat. What’s good is wonderful, but not all the tales/chapters are created equal. The book is available to American readers on October 3rd, and will be released on kindle in the UK on the same date. Readers in the UK who crave a physical hardcover copy will have to wait until November 2nd.