The story takes place following a zombie outbreak. The outbreak, focused around the Midwestern United States, has supposedly been crushed by the military, but not without the loss of thousands of lives. But are they lives any more after they’ve turned? Not sure about that. Anyway, the American people are assured by the government that they are safe and life is moving on.

A rather unscrupulous businessman, Anthony, sees an entrepreneurial opportunity in the wake of the apocalypse. He has intelligence that there may be a town in the Nevada desert that is currently subject to an outbreak, despite what the media reports. One of the pies that Anthony has his finger in is the pornography business. He needs a female – a freshly turned zombie female – for a porno. Yes, you read that right! This is an interesting novella, told from a first person perspective from the point of view of Henry, our narrator. Henry and his best friend, Sam Kranson, get this big money offer from Anthony to do quite an unsavoury job: to retrieve and deliver this zombie. It’s too much money to turn down and neither of them are too focused on morals, so it’s a good fit.

At this point you’d think we’d have reached zombie saturation point. Zombie outbreaks are more common in horror fiction than a haunted house nowadays. This is certainly a more novel spin on the subject matter. The zombies in this book, I’m delighted to say, are of the fast variety – actually faster than fast – and that makes things more scary. Don’t get me wrong. Of course I have a fondness for the slow-moving George Romero zombies but nothing is quite as scary as the 28 Days Later variety (alright they are technically infected and not zombies, but let’s not split hairs.) 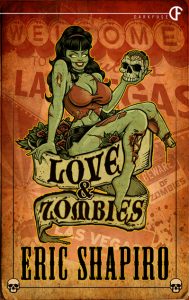 For the first quarter of the book, which admittedly goes by quickly, I really found all the characters obnoxious, but they grew on me. The first person perspective takes a little getting used to, as it is a bit of a rarity, but that grew on me too. Sam Kranson is a complete cocaine fuelled mess who I took to be the embodiment of comedian Sam Kinison – if not in physical stature, then in spirit, complete with the shouting. The other major characters are: Henry’s girlfriend Teresa, who we don’t see too much of but who Henry talks about a lot; Becca, the unfortunate zombie girl; and Manny the sensitive geek. There is a good deal of humour in the book and everything is all very much tongue in cheek. It has something of a gonzo style. All does not go according to Henry and Sam’s plan, but that’s an understatement.

It’s a manic ride with break-neck pacing and before you know it the ride is unfortunately over. That ride includes chaos, murder, slapstick and a car chase straight out of Smokey and the Bandit. The conclusion will definitely put a smile on your face, very satisfying. Love & Zombies is a quick read and it’s very fun. I really enjoyed this.