It’s a horror film for the ages; Bad Match follows a young man whose life is turned upside down when he is matched with a date from hell on a phone dating app. She’s quite the little psycho. It looks like Fatal Attraction for the post-internet dating age and it’s filled with sinister comedy and tragic darkness. Check out the trailer below. 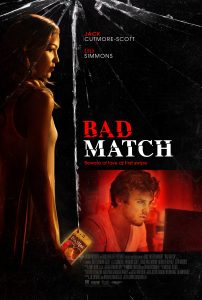 Synopsis:
Harris (Jack Cutmore-Scott) seems to have it all—a great job, plenty of friends, and an active sex life thanks to a range of dating apps. But that all changes when he matches with Riley (Lili Simmons). Unlike Harris, Riley isn’t looking for a one-night-stand, and while at first, Harris just assumes she’s clingy, he’s about to find out the truth is something far more sinister.

Bad Match comes from writer-director David Chirchirillo (Cheap Thrills) who is making his directorial debut. He definitely seems to have brought some of the dark humour from Cheap Thrills along for this ride.

Bad Match will be released on 3rd November.