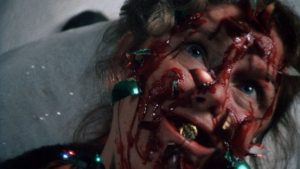 The recent revival of cult 1997 killer snowman flick Jack Frost has been something of a pleasant surprise. Courtesy of Vinegar Syndrome, the low budget, straight-to-video yuletide slasher has just been given the blu-ray treatment, and will soon be screened on 35mm for the first time ever at a special event at Cinematic Void on Hollywood Boulevard in Los Angeles.

Director Michael Cooney (who wrote 2003 twisty horror-thriller Identity) followed Jack Frost in 2000 with Jack Frost 2: Revenge of the Mutant Killer Snowman, his only other directorial credit to date. As recently revealed by horror journo/filmmaker Justin Beahm however, Cooney had big plans for a third film in the series, which never came to fruition. Certainly the ending of Jack Frost 2 – which sees (spoiler!) the titular snowman grow to Godzilla-esque proportions – did seem to be leading to another outing.

Jack Frost’s blu-ray release prompted Beahm to dust off an interview he conducted with Cooney a couple of years back, which never made it to print. As well as talking about the struggles he had to get the first film made (his initial idea was apparently to take a far more serious approach to the material; probably best he didn’t), Cooney revealed the direction he planned to take with Jack Frost 3.

“I started writing [Jack Frost 3]. There is about 20 pages somewhere. It was going to be a giant Jack Frost. At the end of part 2 there is this screaming ‘Jackzilla! Jackzilla!’ and this giant carrot drops on the boat. The [next] one started off ten years later and the kid is all grown up. It was going to be set in the city, and Jackzilla, this giant snowman, attacks a skyscraper, enveloping it and killing people by coming in through the vents and all of that.”

Cooney also suggested that he would still be very much interested in making a second sequel, telling Beahm:
“Digital effects have come down in price by now and I think we could do it. If someone wants to make it I would adore the opportunity. It holds such a special place in my heart.”

Bear in mind the interview is 2 or 3 years old, but with the renewed interest in his film, don’t bet against Cooney renewing the push to get Jack Frost 3 made. 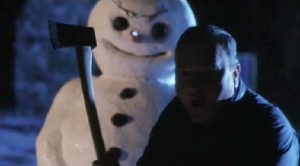 Jack Frost tells the story of serial killer who, on his way to be executed, is involved in a road accident with a chemical waste truck. As one would imagine he is transformed into a murderous, morphing snowman who slays and quips his way through the small town of Snomonton (“The snowman capital of the Midwest”), seeking revenge on the sheriff who caught him.