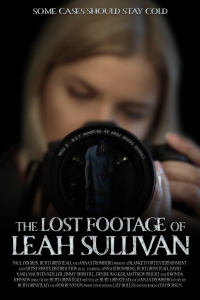 Dark secrets will be uncovered when The Lost Footage of Leah Sullivan finally hits theatres this December.

Directed by Burt Grinstead, this found footage horror film stars Anna Stromberg as the titular Leah, a young journalism student who decides to return to her hometown to investigate a 30-year-old cold case known as the Mulcahy Murders. Helped by a handsome police deputy, Leah starts to realise that the case may not be so cold after all—and her blind ambition might be driving her toward her demise.

The Lost Footage of Leah Sullivan was written by Grinstead and Stromberg, from an original story by Grinstead and Rob Runyeon. The film was acquired for release by Artist Rights Distribution and will have its world premiere on December 11th in LA, with further theatrical screenings planned.