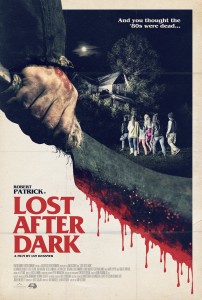 Synopsis:
A group of friends sneak away from their high school dance and steal a school bus to go partying. But when they run out of fuel on a deserted road, they end up fighting to survive the night as a cannibalistic serial killer picks them off one by one.

Lost After Dark pitches itself as being a tribute to the slasher movies of the eighties, and in some ways I suppose it is. Specifically, it pays homage to the slew of forgettable generic slasher fodder that followed relentlessly in the wake of successful films like the Halloween, Texas Chainsaw Massacre, and Friday the 13th franchises, and which were responsible for just about hammering the final nails into the subgenre’s overstuffed coffin by the end of that decade. The writers seem to have stopped trying the moment they grasped the basics of the aforementioned franchises’ plots, without gleaning any understanding of what made them so popular and memorable – that being interesting killers and plucky, well-developed characters for them to chase. Lost After Dark can boast neither of these things, and deserves to stay lost as a result.

If you have even the faintest awareness of slasher movie tropes, chances are you could guess most of Lost After Dark’s plot in ten seconds flat. You’ve got your usual handful of teenage cut-and-paste horror movie stereotypes who just want to smoke weed and have sex, but they end up stranded in the middle of nowhere when they run out of fuel. What better place for them to spend the night than the creepy definitely-abandoned house which could only possibly belong to a crazy cannibalistic murderer. Should they split up to search the house? You betcha. Cue the insane killer wielding a variety of sharp implements with which to rack up our body count. Now, who’s going to say ‘I think we should get out of here’ first? 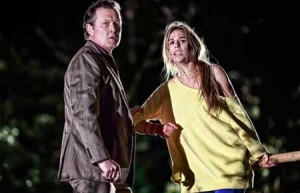 I’m going to be blunt: I hated this film. HATED IT. I’m not sure how a filmmaker could so violently miss the point of what made the movies he’s trying to imitate stand the test of time, but somehow director Ian Kessner managed it.

First of all, there is only barely an attempt to make this feel like an eighties film. Big hair and fake film imperfections added in post-production do not an eighties film make. One scene involving a girl frantically trying to free her foot from a bear trap as the killer advances abruptly ends with a ‘REEL MISSING’ note, which I’m sure the writer thought was very clever, but which I suspect mostly exists to cover for the fact that they had no idea how said character survived (her later rushed explanation of hitting the unstoppable psycho ‘with a rock’ didn’t cut it for me).

Speaking of that killer, imagine the distant cousin of Leatherface and Rob Zombie’s Michael Myers, and then forget anything interesting those characters had going for them. He wanders around after our heroes, dispatching them in boring kill after boring kill. The only death which remotely caught my attention involved the token black character having his eye skewered on a piece of broken glass, and that’s only because it reminded me of the infamous eye-gouging splinter scene in Fulci’s Zombi 2. I’m generously assuming it was intended as a homage, but it failed to live up to the nerve-shredding build-up of the eye slowly being pushed toward the point, and somehow the effect in the 1979 film was more convincing.

Lost After Dark almost tricked me into getting my hopes up with its admittedly surprising first death (not counting the lacklustre standard opening kill), but it’s all downhill from there. The audience is given no reason to root for any of the characters because there is virtually nothing to them beyond their stereotype. In fact, they’re so bland that I found myself making a list of their names at one point because I knew I wouldn’t remember them otherwise, and that’s when I realised the names were all references to classic slasher directors and final-girl actresses. Real clever movie. We know you’ve seen a slasher movie or two, but why should we care if you’re not going to do anything other than weakly imitate them? 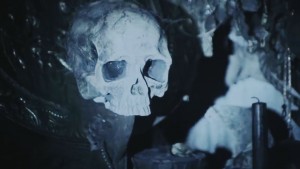 And that’s the crux of the problem right there. Sheer imitation is not in and of itself interesting. If Lost After Dark had been a camp and over-the-top sendup of the slasher genre, it might have worked. If it had had something to say about the genre other than simply reminding us that eighties slasher films existed, it might have worked. If it had actually been scary, at least it would have had that going for it. I wasn’t expecting it to be as self-aware about the genre as something like Scream, but I didn’t think I was asking too much when I expected it to be entertaining.

You know what they say about not reminding audiences of good films in the middle of your rubbish one? Lost After Dark made the fatal mistake of trying to allude to an entire subgenre of films that you could be watching instead. There is nothing else to it. I was genuinely relieved to reach the credits, because I would not have watched to the end if not for the sake of writing this review. The director should have gone a step further with the ‘Reel Missing’ scene, and just misplaced the entire thing.