Lords of Chaos Getting Unrated Blu-Ray Release in May

Black metal biopic Lords of Chaos is coming to DVD and Blu-ray in May, complete with an unrated cut of the film. 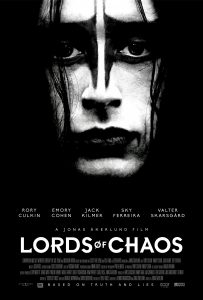 Directed by Jonas Åkerlund (Polar), the film stars Scream 4’s Rory Culkin as Øystein Aarseth, better known as Euronymous, the man credited with founding the Norwegian Black Metal scene. It follows the movement from it’s gritty beginnings in the 1980s, through the church burnings and notoriety of the 90s, right up to Euronymous’s murder in 1993 at the hands of fellow musician Varg Vikernes (played by Emory Cohen). It’s a brutal and at times uncomfortable watch, but an interesting glimpse into this pivotal moment in metal’s history.

Lords of Chaos will be released on DVD and Blu-Ray on May 28th. The DVD version features just the rated version of the film and no bonus features. But if you pick up the Blu-ray/DVD combo, you’ll get the unrated version, featuring an extra two minutes of footage, plus some bonus features (teasers and trailers).