With a burning church and just-about-legible title, the poster for Jonas Åkerlund‘s Lords of Chaos is surely the most black metal piece of film art ever. 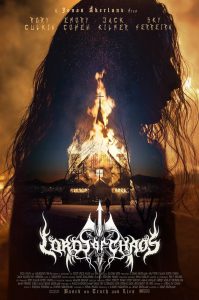 The film, which premieres at the now underway Sundance Festival, uses elements of truth to tell the tale of Norwegian teenager Euronymous (Rory Culkin) who aims to spread the word of black metal through 1980s Oslo. When he invites loner Varg (Emory Cohen) to join his “Black Circle”, a rivalry builds, leading to violence and death.

Starring with Culkin and Cohen are The Green Inferno’s Sky Ferreira, Valter Skarsgård and Anthony De La Torre, who also appeared in Metallica’s ManUNkind video, which was directed by Åkerlund. A prolific music video director, Åkerlund has also made promos for the likes of Candlemass, The Prodigy and Smashing Pumpkins among many, many others. His handful of features include 2002 drug drama Spun.

Lords of Chaos premieres at Sundance on Tuesday, 23rd January.