Synopsis:
Josh (Jeremiah Watkins) is a financially struggling twenty-something who’s recently split from his girlfriend and spends most of his time reviewing apps for an online video blog. One day Josh discovers an app called i-Lived which promises to change his life for the better. After undertaking a series of tasks set out by the software, Josh’s life improves but the app soon evolves into a governing force as its demands become darker and much more challenging. 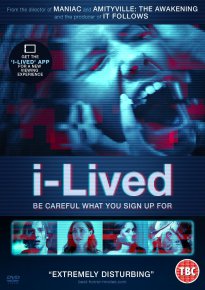 Tech-horror is a sub-genre that has expanded massively in recent years with the evolution of computer software/ technology. It seems that every new breakthrough is accompanied by a film to either promote or utilise it as a tool to attack credulous victims. The likes of Unfriended, Friend Request, Open Windows and Ratter capitalised on the popularity of social media, but writer/ director Frank Khalfoun’s (P2, Maniac) i-Lived integrates app software into its concept, employing it as both a literal and narrative mechanism. As well as relaying a straightforward tale, Khalfoun explores society’s obsession with smart-phones/ android devices and adopts their displays into the film’s visual design. Open Windows also did this as, to a greater extent, did the family sci-fi Earth To Echo, with characters adhering to their androids’ demands and enforcing plot curves based on the software’s suggestion.

i-Lived is teeming with the type of luddite-like loaded metaphors and paranoid/ age-old conspiracy theories about mankind being conditioned by technology. Beneath its surface story of a young man’s struggle with a possible supernatural presence operating within his device, these techno fears run riot, knit tightly within the subtext and inform the plot with welcome depth. i-Lived, along with Tod Williams’ upcoming Stephen King adaptation Cell, could kick-start a swathe of techno-fear horrors, focused on the evolution of everyday software into sentiency instead of them just being utilised as tools for monsters and mad men to bludgeon us with. 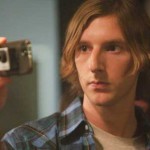 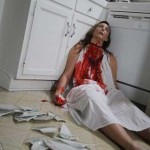 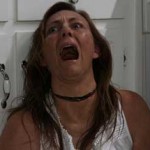 Following a morose opening credit sequence, garlanded by a solemn electro score (which could also date the film along with its technology) i-Lived abruptly twists into a chipper comedy, adopting the tone of its protagonists’ vlogs. The script efficiently embeds us into Josh’s world before distorting it but the tonal shifts are frequently too jarring. The cranky, playful Josh is well performed by Watkins yet is far too rasping a protagonist for the viewer’s to fully empathise with and doesn’t have a strong enough screen presence to carry i-Lived as the lead. This is not solely a criticism against Watkins’ performance or Khalfoun’s (as a director) decision to cast someone who could realistically play such a part but it’s the writer who crafted such a scatty character to carry the story.

The narrative is, in many ways, similar to both the novel and film version of Stephen King’s Christine, with i-Lived (the app) taking the place of a 1958 Plymouth Fury, and while both films are far from masterpieces they have many memorable moments. i-Lived plods lost for a while before blossoming into fresh terrain for a freaky final third where both Josh and the tale finally find their feet. Despite its juddering plot, Khalfoun’s film works for the majority and resists adhering to genre conventions which would have restricted it from flourishing into something so peculiar. By integrating new technology into its concept, i-Lived transcends the social media horror spectrum while still seeming like a part of it but also often feels tangled and distracted. Khalfoun’s film often plays like a feature-length Twilight Zone episode and may seem relevant today but in the future it will probably be as terrifying/ pertinent as the 50s nuclear horror b pictures, the 1999 millennial bug or 80s video nasty outrage. 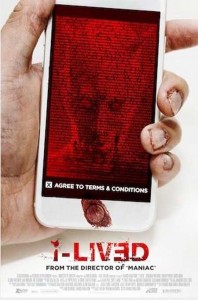 It will be interesting to see how i-Lived is viewed in thirty years: as obsolete as it’s technology/ electro soundtrack or fondly, with a sense of nostalgia. Considering the likes of The Video Dead, My Little Eye and Feardotcom are tech-horrors that embellished products/ fads of their era, these films have, to some extent, slithered into obscurity, and are now remembered mostly by horror fans instead of general cinema-going audiences. It seems unlikely that i-Lived will be earmarked as either a cinematic or genre milestone. It may be fun and thought-provoking to some but one can imagine Khalfoun’s film eventually becoming obsolete due to the ever-increasing rate of tech development. i-Lived will likely lose itself in a sea of similar features, wind up haunting the darker recesses of online streaming sites or be buried, like an old mobile phone, in a box at the back of a cupboard, hoping to one day be played and reappraised.