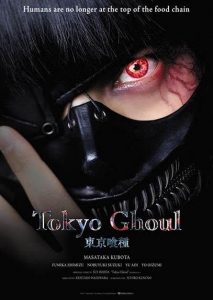 Funimation Films has acquired the rights to a live action adaptation of the anime fantasy series Tokyo Ghoul. The film will be directed by Kentaro Hagiwara (Anniversary) and stars Masataka Kubota – who also stars in the Japanese live-action adaptation of Death Note – in lead the role of Ken Kaneki.

Tokyo Ghoul is set in a world where humans are no longer at the top of the food chain, having been pushed down in favour of Ghouls. They run the underbelly of Tokyo and feast on human flesh. Ken is unexpectedly drawn into the world of Ghouls when he is turned into a half-Ghoul, and struggles to find his place in society with his strange hybrid identity.

You can check out the recently released trailer for Tokyo Ghoul below, which gives us a good look at the main characters and the epic special effects that bring the Ghouls to life. We think it should impress fans of the anime, because it does appear to be keeping true to the original’s combination of complex characterisation and impressive visuals.

If you haven’t seen the Tokyo Ghoul series, then Netflix subscribers will be glad to know it is available in its entirety on the streaming platform, so now is your chance.