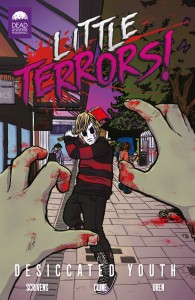 Set against a post-magical-apocalypse background, a group of teenage boys who’ve been turned into monsters try to survive in a grave new world, whilst dodging the other undead freaks that inhabit it. The main characters are all familiar faces from the roster of horror films. Throw together a masked axe murderer, creepy ventriloquist’s doll and teen wolf, all the crew is missing is a vampire and maybe a mummy. The problem when you borrow from the classics is that they have already set the bar pretty high in terms of characterisation, they are classics for a reason, and this book isn’t going to redefine them, or join them.

The overall vibe is a little like if 1980’s cartoon Gravedale High and the film version of The Road had a lovechild, abandoned it on a doorstep and then it was raised by a low budget zombie movie. The art style is relatively simplistic as well. Everyone is more or less the same height and build, but I enjoyed some of the facial expressions. There’s also an interesting editorial choice whereby they pull no punches when it comes to graphic blood and gore in the art, but obfuscate the F-bomb in the text. Keep an eye out for the amazing disappearing, reappearing character. If you start to wonder “where’s the guy with the horns?” don’t worry, you didn’t skim over his untimely death, they just stopped bothering to draw him for a long time. 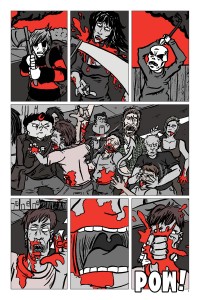 The one thing that really does bug me is where are all the women?!? Even amongst the zombie hoards they are pretty underrepresented, and the only woman who speaks more than three words is all tits and no eyes. It feels lazy; it’s a comic for teenage boys, about teenage boys with a set of boobs chucked in for the one reader who has hit puberty. However if you’re gagging to see a teenage Frankenstein’s monster bludgeon a load of zombies with a baseball bat you might be willing to overlook the lack of subtlety and sophistication.