Directed by Maurizio del Iccolo and Roberto del Piccolo, My Little Sister is a micro-budget horror film about a young couple who find themselves at the mercy of a murderous villain who loves to wear the faces of his victims. Sounds familiar right? Well, it’s true that My Little Sister attempts to channel the ferocity of the Texas Chainsaw Massacre but fails in its execution to harness its power and the end result is nothing short of a disappointment.

In the film, a young couple takes a four-hour journey into the middle of the woods to meet their friends but at the campsite there is no sign of them. Convinced their friends wouldn’t have strayed too far away the couple ignore a warning and settle down for the night. What follows next leads up to a pedestrian third act that disappointedly lacks any real surprises or genuine chills. 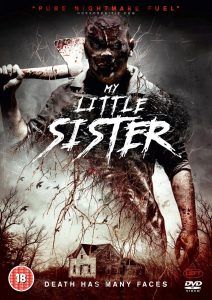 Leading the cast is Holli Dillon who plays Sheila. Headstrong, independent and a feisty, Dillon shares her time on-screen with Mattia Rosellini who plays her boyfriend, Tom. Together they are the only redeeming factors of this film. They do the best job with what they can to keep the film ticking along but their performances are let down by the shoddy script penned by Roberto del Piccolo.

Speaking of which, as directors, Maurizio del Iccolo and Roberto del Piccolo struggle to keep the film on track and it shows in abundance. The film as a whole looks incredibly cheap and unpolished. However, I do commend the duo attempt to elevate the film above it’s slasher facade by adding a sense of mystery behind the motives of the villain but their efforts are trumped by its Poundland quality production value.

As you have probably guessed, I didn’t enjoy this film. There’s very little to be enjoyed here! In fact, with its boring chase scenes and a villan who is almost laughable, what you’re left with is a severely plagued game of cat and mouse in the woods that will leave you questioning your life choices.