Lionsgate to Release Limited Edition The Unholy on Blu-Ray

The demonic horror The Unholy is set to be released on blu-ray for the first time and the edition is going to be limited, so you’re going to have to act fast! The blu-ray comes courtesy of Lionsgate and will be released on 27th June with the film’s original ending included. 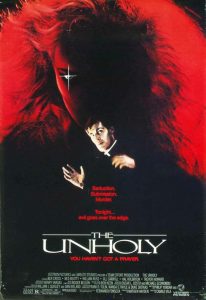 In New Orleans, a city with a dark underside of black magic and satanic worship, 2 priests have been brutally murdered at St Agnes Church.  Now The Unholy Reign only to be challenged by the purest of mortal souls. Father Michael is appointed to the ungodly parish.  Is he really strong enough to fight off this terrible evil? Or will he be the third priest to die?

If you haven’t seen The Unholy then this is the perfect time for you to catch the classic 1988 film in excellent high-definition. Be sure to grab yourselves a copy of The Unholy when it is released on 27th June; it also includes an audio commentary from the film’s producer Mathew Hayden.