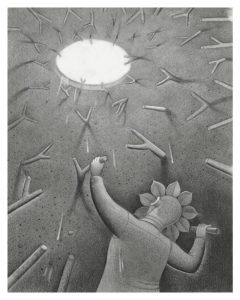 They say there are two places that no one can hear you scream: Space and Hell. Aside from sharing titles with a couple lacklustre Friday the 13 franchise movies, both are places you’d hate to end up when you’re dead, which is why Limbo exists. A place between Heaven and Hell where nothing really happens and no one knows your name, you can be as strange as you wanna be while waiting for ticket to the afterlife. Creator Dave Calver explores this bizarre side of death in his newest work Limbo Lounge. Not quite horror, not quite slice-of-life, but something in between, Limbo Lounge follows the lives, er afterlives, of several dead residents who attempt to make sense of the sweet hereafter while sporting ironic punishments for their crimes on Earth.

The comic starts off following a flower man that has pulled himself out of the ground and begins to wonder aimlessly in his surroundings. In a silent and grae landscape, he follows a group of other strange creature men and eventually climbs out of a hole into colourful bar. Here he learns that he has died and is now in Limbo, a place mostly forgotten by both God and the Devil. Filled with suicides, racists, murderers, unbaptised babies, and a nun with the power to kill, Limbo is definitely a lot more fun than Hell, but not everyone is so eager to stay there. When a killer beauty queen learns there might be a way out, all Hell (heh) breaks loose. Will our hero choose a life of repenting despite not knowing why he’s really there or will he take just one last job? 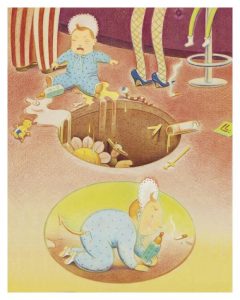 Limbo Lounge is, at the surface, an odd tale about a bunch of weirdos who end up in Limbo. It’s the kind of book you would find in your toy-collecting uncle’s comic collection when you’re a kid and go ‘what the hell is this?’ It certainly has the look of a young-readers work, easily tricked into the hands of a child who doesn’t know any better, but there’s something very unnerving about a work that sports confused flower man staring blankly at the sky as the cover. The story is a lot like Dante’s Inferno, where at first it seems like ironic punishments are the flavour of the day, but in reality, it’s about being stuck in a place that you’ll never get out of, a place where past actions and indecision become a reality. As each person explains his story (or has someone explain it for them), you get a sense that Limbo is a merely a reflection of our real world. Once the comic picks up speed, it becomes about change and if surviving the fall from Limbo is really worth it.

That being said, a lot of the interest also comes from the background character. It’s not just hipster irony and doom-and-gloom, but about love and hope and all that disgusting stuff. Several characters are seen sticking together despite the overwhelming despair and while not everyone is a godly saint, they are human. In the end, everyone in Limbo is just another person who did the best they could (despite the actual wretched sinners). Limbo Lounge requires a deeper digging than its surface and it’s really up to the reader on what they take away from it. This is either a great, independent work that speaks volumes to the human experience or a dumb story about a flower guy who can’t make a damn decision to save his life. Either way, you wouldn’t be wrong. 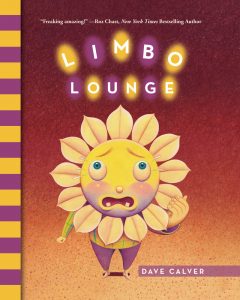 Of course, Limbo Lounge cannot spoken about without talking about the art. Calver’s art is far from the chiseled-abs perfection of mainstream works and instead delves heavily into cartoons, MAD magazine, and vinyl toys. The angles are goofy and the characters all have a deer-in-the-headlights look, which, in terms of Hell and Limbo, is probably the best choice. He handles all the colouring himself which seems to switch from paint to colour pencil and gives the whole comic a bit of a child-like innocence to such a heavy subject manner. It’s a very disarming choice, purposely chosen to change the readers perception from reading a comic to a reading a really long art piece. Personally, I enjoy how he handles the difference between Hell and Limbo, where Hell is drawn in greyscale and vibes as a mostly silent, dream like world while Limbo is fully coloured and full of action. Calver easily sets up the mood and doesn’t shy away from letting his art speak where his words cannot.

If you’re interested in this phantasmagorical view of death, grab a hot, fresh copy today! Released by Image/Yoe Comics on a shelf near you!