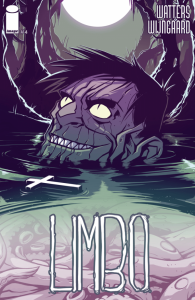 Limbo, a six part genre-bending series from Image Comics, is the story of Clay, an amnesiac private investigator working in the lurid Dedande City. Over the course of the first four issues – the most recent of which was released this week – Clay’s investigation takes him on a journey that encompasses neo-voodoo rituals, flesh eating cults, and in one particularly memorable sequence, a rather unfortunate animal sacrifice.

Writer Dan Watters deftly combines elements of horror, noir and science fiction, creating a comic series which feels refreshingly original. Though he clearly has an ear for snappy dialogue, Watters also throws up some interesting philosophical questions, namely about the imagined nature of identity, and the effect that technology can have on a modern society. Admittedly, these questions aren’t always followed through, but with two issues left to go, Watters still has time to tie these ends up in a gratifying way.

Like Cronenberg’s Videodrome, most of the horror in Limbo comes from the mind-altering effects of technology which, if misused, can leave the viewer in a trance-like state. In the second issue, the all-powerful ‘teleshaman’ explains that technology can be used as a powerful form of mind control, particularly as more and more people become estranged from the natural world. This is effectively explored in the same issue, where Clay is swallowed by a television and forced to traverse a realm of ever-changing images.

The art, drawn and coloured by Caspar Wijingaard, is a heady mix of 80s VHS covers and Sunday morning cartoons, all rendered in bright, fluorescent hues, like Dario Argento directing a year 12 disco. This style makes the violence in Limbo, which is both frequent and grotesque, all the more shocking when it appears.

Issue four, which culminates in a cannibalistic ceremony to a Lovecraftian sea-monster, advances the plot towards its imminent conclusion, but with so many loose threads, it should be interesting to see if Watters and Wijingaard can wrap up the story in a way that feels satisfying. I, for one, can’t wait.