THE LIGHT AT THE END: Book Review 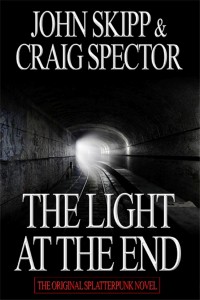 Vampires have taken a beating lately due to recent movie and TV outings, making them weak and romantic. Thankfully vampire fiction is still strong due to the likes of Guillermo Del Toro and The Strain Trilogy. I decided to take a step back to the eighties, to a darker time in vampire tradition and read The Light at the End. This book is also dubbed the original splatterpunk novel, which is up there with my favorite horror sub genres. So, with that being said, I’m not sure why it took me so long to get to this book.

The book starts off with a brutal massacre on a late night subway train in the bowels of New York City. During the attack from an ancient vampire, Rudy Pasko, a young punk, is turned and left to enjoy his new powers. Rudy is incredibly obnoxious and easy to root against as he seeks out acquaintances from his old life. Through these interactions, a group of people – former friends, an ex-girlfriend and witnesses – who know the truth about the continuing atrocities taking place in the city get together. They become an unlikely group, set with the task of putting Rudy’s killing spree to an end before he gets to them. The characters in the group are a mixed bag and their personalities complement each other, from the rage-filled bruiser, Joseph, to the wimpy Stephen and the vampire obsessed Claire.

As for the vampire, Rudy, I really enjoyed the times when, despite his incredible powers, he shows that he’s still vulnerable to bullying and confrontation, a hang over from his living days. He comes across like an egotistical, spoiled only child (I’m an only child too, so I can say that). That makes you love to hate him, and what more can you ask for in a villain?
The climax builds as our newly formed group of vampire hunters go in search of Rudy. The cat and mouse hunting does drag on a little bit. Suffice it to say that the final showdown is satisfying and there is plenty of bloodshed. There is some decent gore in the book which was probably much more shocking when it was originally released. Nowadays the limits of splatter have been pushed far further.

The book has good pacing and there is always the sense of danger present. There are some very dated social attitudes which are a bit distracting and the low points of the book. It’s an enjoyable read and if, like me, you’ve somehow missed this book so far, it is definitely worth reading.