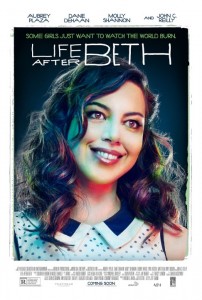 Synopsis:
Death hasn’t stopped Zach’s girlfriend getting back together with him.

Film titles that punningly play on words are never a good sign but thankfully writer Jeff Baena has bucked the trend with this his directorial debut. Utilising the other worldly look of Dane DeHaan as Zach who’s mourning the death of his girlfriend, Beth, from a snake bite when she went out hiking. Moping about wearing her scarf and looking like he’s about to attend a Tom Baker era Dr Who convention he’s  puzzled that her family don’t seem as distraught as himself. The answer he soon finds is because she’s not dead at all and has somehow dug herself out of her own grave. Elated yet curious as to how this has happened he finds himself torn between whether she might be some sort of zombie or if this is a miraculous but inexplicable resurrection.

With a quirky premise Baena has written an oddball, off the wall film which has rightly attracted a great cast led by John C Reilly as the father keen to keep Beth’s return from the dead a secret.  Whether it be Aubrey Plaza as Beth with her bizarre yearning for smooth jazz whose performance towards by the end seems to be channelling Bobcat Goldthwait in his ‘Police Academy’ days (not a bad thing in the case of this film) or Matthew Gray Gubler as Zach’s job obsessed security guard brother there’s not a weak performance in the whole cast.

Although the gore is not to the fore this is a funny and at times demented film and is a worthy addition to the zom-rom-com sub genre.