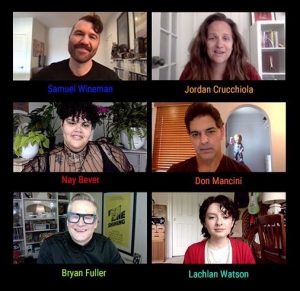 The last decade has seen some major shifts in the queer horror landscape, with LGBTQ+ characters stepping from the shadows to the forefront and queer subtext coming into clear focus as undeniable text. While these shifts have been celebrated by LGBTQ+ audiences and met with interest and curiosity from many of our allies and peers, there are always those who argue that our community is suddenly “forcing queer themes down their throats.”

But horror is and has always been queer. Some people just hadn’t noticed until now.

This was the subject of Comic-Con at Home’s “Horror Is Queer” panel, presented by Shudder and moderated by Jordan Crucchiola. Joining Crucchiola was Sam Wineman, writer-director of The Quiet Room and director of Shudder’s upcoming queer horror documentary; Nay Bever, co-host of the podcast Attack of the Queerwolf; Bryan Fuller, creator of Hannibal; Don Mancini, creator of the Child’s Play franchise and a writer on Hannibal; and Lachlan Watson, who plays Theo Putnam on Chilling Adventures of Sabrina. These leading voices in the world of queer horror provided fascinating insights into where queer horror has been and where it’s going—starting with a definition of what it actually is.

Sam Wineman, who has been immersed in queer horror as he works on the documentary, argues there are four different kinds of queer horror: explicit representation, where a character identifies as LGBTQ+; intentional or unintentional queer-coding, where there is an implication that a character is queer; ownership, where queer people see themselves in horror media that perhaps wasn’t intended to be queer; and, lastly, horror that comes from a queer creator, regardless of the characters or subject matter.

“Even when we’re queer creators and we’re telling straight stories, they’re still queer,” Wineman says, “because we’re informing it with our own life experience, and you can see something in there.”

This is something that Don Mancini realised in retrospect when looking back on the Child’s Play franchise. It was only from Bride of Chucky onwards that began intentionally including queer elements, yet the first three films in the series were still informed by his queer identity. This comes through most clearly in the character of Andy Barclay, a lonely, isolated, fatherless boy looking for a friend.

“I didn’t think about it at the time,” Mancini says, “but nowadays, I think it probably had a lot to do with my very conflicted relationship with my own dad, growing up as a gay man with a macho father whose biggest nightmare in the world was that I would become gay…. The loneliness, definitely, was autobiographical.”

Bryan Fuller had a similar moment of revelation as he worked on Hannibal. Since the series is essentially a prequel to Thomas Harris’ Red Dragon, in which neither Will Graham nor Hannibal Lecter is presented as overtly queer, the showrunner aimed to be as respectful to the source material as possible—setting out to tell a story about how straight men become fascinated by and “fall in love” with each other. But as the series progressed, fans began tapping into a queerness that Fuller hadn’t realised was there. And ultimately, exploring this queerness, rather than ignoring it as many shows would, was the most authentic way to move the story forward and stay true to the characters. 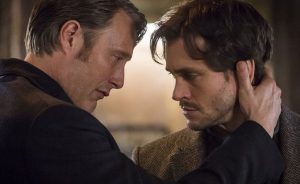 “The material, the actors, the community receiving the show all spoke to the queerness of it, and it was hard to ignore,” Fuller recalls. “In the attempt to try and be as authentic as possible, what came through the authenticity was a queerness. It wasn’t an agenda. It wasn’t something that I necessarily set out to do in design. But it was something that was adapted because it felt genuine for the characters. So I let the characters tell me and the writing staff what they wanted to be, and they said, ‘We’re queer!’”

Hannibal’s queer trajectory was especially meaningful to fans because, in addition to having lesbian and bisexual supporting characters, the show’s two core protagonists were involved in a queer relationship. But the series was also refreshing in its casting of LGBTQ+ actors like Scott Thompson in roles that weren’t written as queer. Lachlan Watson, who has often felt typecast, argues that giving queer actors opportunities to play a wider variety of roles will be good for everyone—resulting in characters with unique nuances and depths. 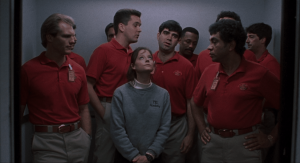 Where queer people see (and are allowed to see) themselves in horror media is often the subject of much debate. As Mancini points out, any discussion of Hannibal’s queerness inevitably results in comments from some viewers claiming the show is straight through and through. For Nay Bever, however, the question of who gets to decide what media is queer is very simple.

“If queer and/or trans folks want or do see themselves in something, then it’s ours—period,” she says. “I think any community that is marginalised and experiences the death rates and the death threats that we do… we are 100% allowed to find ourselves wherever we can.”

This ability to see oneself in horror, particularly in the exploration of the “Other,” has helped many queer people put words to and come to terms with their own queerness. Mancini says he’s deeply proud that his work—particularly Seed of Chucky, in which Chucky and Tiffany’s child Glen/Glenda explores their gender identity—has helped many queer and trans kids feel more comfortable in their own skin simply through seeing queer representation on the big screen. Wineman, however, says that even the earliest entries in the Child’s Play franchise helped him find power and confidence growing up. Queer people have a lot to be afraid of, but being brave enough to watch horror films like Child’s Play at sleepovers gave him a kind of shield with which to conquer the world. 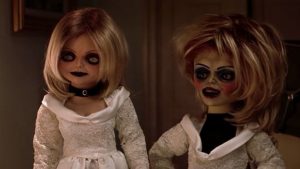 “As an adult looking back at all of this, it feels like what I was drawn to was the strength I found in it, and the characters who are survivors—because I myself am a survivor,” Wineman reflects. “A lot of queer people relate to those feelings, because queer people are survivors.”

Fuller similarly related to characters in danger and found a sense of comfort in their survival narratives.

“I grew up in a very violent home with a very physically and verbally abusive father,” he says. “It was interesting to have a narrative that spoke to the danger I felt daily, and also to see people survive that danger in a way that spoke to my ability or potential to survive the danger that I felt.”

Of course, queer people also frequently identify with the monsters and villains of horror films, either because their actions provide a kind of catharsis by proxy (such as Carrie White wreaking havoc against her bullies) or because these characters have been deliberately queer-coded. The latter case is where the water gets a little muddy. While some queer people can enjoy problematically queer characters like Angela in Sleepaway Camp or Bobbi in Dressed to Kill, others find these portrayals offensive, and potentially, dangerous. Who gets to decide which reading is correct?

“When we’re navigating the waters of queer horror, we have to keep in mind that two things can be true at the same time,” Wineman says. “Just because I find myself in it doesn’t make it the one true answer, or the other way around.”

In the case of transgender representation in particular, Bever says she always listens and defers to trans perspectives on the matter.

“If trans folks are like, XYZ, I’m like, okay, XYZ,” she says. “That’s it, period…. I’m always going to defer to the people whose livelihoods are affected by that.”

Questions like these are becoming increasingly important as queer horror becomes more mainstream. As Watson highlights, this is often happening in the form of reboots and retellings—including Chilling Adventures of Sabrina—which explore old stories through a queer lens. And while some vocal segments of the horror community are disgruntled by this trend, as Fuller points out, it wouldn’t be happening if there wasn’t an audience for it.

“Look at Get Out and how it changed everybody’s perception—like ‘Oh wow, black horror is a thing,’” he says. “Black people have known that forever, and white people are now able to do something that black people have always been doing, which is see themselves in characters that don’t look like them. Now we’re seeing a little bit of that with people who are kind of the traditional heteronormative audience being able to see queer people, see black people, and see themselves in the humanity of those characters.”

“I think that now there is a realisation from the mainstream that we are ready for more,” Wineman adds. “[The queer community has] known that there is a demand there, but now I think there is a cultural awareness that we want to see work that reflects the world that we live in.”

Whether you’ve been devouring this type of media for years or are only now dipping your toes in the rainbow waters, it’s an exciting time to be a creator or consumer of queer horror. A sea change is underway, and the future of horror is unmistakably queer.

“The time to fight, the time to try, the time to create is always now,” Bever says. “Pedal to the metal, put your foot on the gas, let’s go.”