Let’s Purge Again with this Trailer for The Purge: Election Year 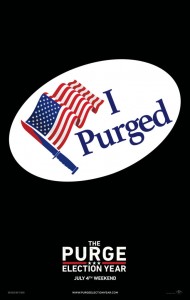 It’s rare for a film sequel to be greater than its predecessor, but we would argue that this was the case with The Purge. The first squandered a great concept with its average execution that was filled with very few scares and surprises. Plus, it was too damn dark to see anything! The second took to the streets and showed that the idea would benefit from a larger scale; the home-invasion decision was just too dull and confined.

Check out the new trailer for The Purge: Election Year which takes place 2 years after Anarchy. To be honest, it looks pretty damn great. Furthering the story even more, we’re taken to the government where a senator is campaigning for an end to the annual Purge – uh oh, this spells bad news. She is then forced to barricade herself in with the help of Leo Barnes (Frank Grillo – The Purge: Anarchy) when the Purge takes place; obviously, a lot of people are a bit miffed that she wants to take away their one night where crime is legal.

What this trailer does brilliantly is ramp up the madness; similarly to Suicide Squad, the film has opted for a colour palette of bright pinks and blues against stark blacks, heightening the visuals and emphasising the satirical tone of the franchise. It looks like a lot of fun and there’s some really great imagery in there. Plus, some of the masks look scarily crazy.

The Purge: Anarchy sees James DeMonaco take the reins once again with stars that further include Elizabeth Mitchell, Mykelti Williamson, Raymond J. Barry and Ethan Phillips. It has a release date set for 1st July 2016 in the USA and 15th July 2016 in the UK.