Let the Battle Commence; A New Poster for FOX’s The Exorcist 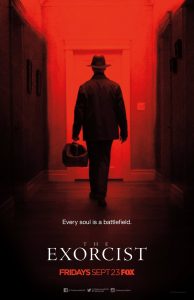 A new poster has been revealed for FOX’s TV reimagining of The Exorcist and it describes every soul as being a battlefield, which is pretty terrifying. The red and black colour palette increases the sinister feeling and puts a new spin on the classic poster for William Friedkin’s The Exorcist. There is a similar use of lighting and, once again, shows the Exorcist preparing to enter the home of a supposed possession.

The Exorcist has been written by Jeremy Slater and directed by Rupert Wyatt (The Gambler, Rise of the Planet of the Apes). The show stars Alfonso Herrera, Ben Daniels, Geena Davis, Hannah Kasulka, Brianne Howey and Alan Ruck.

Let battle commence when The Exorcist airs on 23rd September on FOX.