Now out on VOD and DVD, SCREAM caught up with Les Sholes to talk about his award-winning horror movie Exscind and the dedication it takes to be a writer, director and producer. 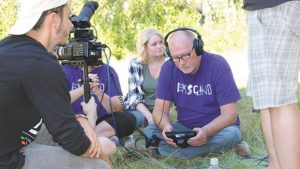 SCREAM:   HOW DID YOU GET STARTED IN FILM MAKING?

Les:  I began by taking several courses throughout the country in screenwriting, directing and film-production.   Working on several  film sets in the United States and Canada as a Boom Operator, Gaffer and Production Assistant provided opportunities for on-set  experience .  I also directed and produced music videos for several upper Midwest recording artists.   My first film award was for a short film that I shot in Mexico called “El Gato”.

SCREAM:   WHAT OTHER PROJECTS HAVE YOU WORKED ON PRIOR TO THIS FILM?

SCREAM:   WHAT HAS BEEN THE MOST REWARDING PART OF FILM MAKING FOR YOU?

Les:   Filmmaking is my passion so it has all been good but winning several international awards including three Upper Midwest Emmy Nominations has, overall, been the most rewarding.

SCREAM:   YOU WROTE DIRECTED AND PRODUCED THE PARANORMAL HORROR MOVIE “EXSCIND”.  HOW LONG DID IT TAKE YOU FROM CONCEPT TO COMPLETION?

Les:  The idea came to me long before I started to write the script.  If we take that out of the equation,  I started writing the script in November, 2014, and finished the seventh,  and final,  draft in early July of 2015.  When the script was completed, we went right into rehearsals for two and a half months.  The movie was shot in only 6 days including B-Roll, but the editing took 3 months.    With that being said, it was  15 months back- to-back,  14 hours a day, seven days a week  in addition to the last year and a half of marketing.

SCREAM:   HOW DID YOU COME UP WITH THE IDEA FOR THE MOVIE EXSCIND?

Les:  I’m a huge fan of “The Night of the Living Dead”.   I wanted that same style/appeal but I knew I needed a different concept.  Originally, my intent was  to have the paranormal group investigate the old Fergus Falls, MN, State Hospital which is a huge, gothic-style insane asylum that opened in 1890. The hospital has been abandoned for years and it has that right amount of decay and eerie ambiance. The concept had the ghosts of the insane asylum coming back from the dead as ghosts rather than zombies. I called the city who owned the building several times but no one ever called me back so I decided to keep the same concept, using a different location and changing up some of the characters.

SCREAM:   WHAT WAS THE MOST DIFFICULT PART OF THE PROCESS? 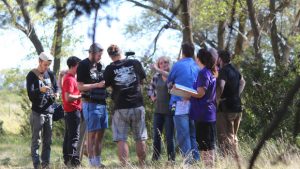 Les:  The whole process was very difficult but the script was by far the most challenging.  Anyone who knows how to write a screen play and who follows the correct formula, knows that by changing one word in the script could change the whole story.    From the back-story, the conflicts, the climax, the balance to the resolution,  etc,  you must be careful and know what you’re doing.  Interestingly, horror movies, like mysteries, don’t need a resolution.

SCREAM:   WHAT KIND OF DEDICATION DOES IT TAKE TO DO A PROJECT OF THIS MAGNITUDE?

Les:  Dedication is an understatement.  The best way to describe it is to imagine yourself in military basic training while going to medical school and working a full-time job.  You’re working with at least 40 people at any given time and they all have a specific duty.   There’s absolutely no time for play. If one person gets sick or there’s an emergency during the shoot, your whole production could fail. After all was said and done, I ended up with a horrible body rash, caused by the stress of the movie which required treatment at the Mayo Clinic in Rochester, MN.

SCREAM:  IS THIS YOUR FIRST FEATURE FILM?

Les:  No.  “Ole and Lena” was my first feature film.  It was a wacky comedy that screened at several film festivals.  Ultimately, it was sold to hundreds of retail and video stores throughout the country.

SCREAM:   HOW DID YOU COME UP WITH THE TITLE?

Les:  I wanted the title to stand out from anything else and one that would create curiosity.   We chose a word that most people wouldn’t recognize but a title that would match the climax of the movie. “Exscind” means to “cut out or cut off” and is used as a medical term.     It works out great for marketing purposes.

SCREAM:   HOW IS EXSCIND DIFFERENT THAN THE OTHER PARANORMAL HORROR MOVIES OF THE PAST?

Les:  There is a huge difference.  I wanted to do a paranormal movie long before “Paranormal Activity” was filmed but I wouldn’t do it for one reason. Almost all the characters in other paranormal movies hold their camera while they are filming the parts of extreme horror. The problem is if you were really to experience extreme horror you could give a rat’s ass about your camera.  You would drop or throw the damn thing and get the hell out of there.  With “Exscind” the paranormal group uses a body cam to record their experience and they literally forget they are using it, not to mention that the body cam itself, is possessed by the ghosts.

SCREAM:   WHAT IS THE MOVIE ABOUT?

Les:  In a small farm community back in 1966, several people suddenly went missing.   A few months later the mystery became apparent when an older, reclusive couple was found to be responsible for torturing and murdering the victims.  Now, in the present  50 years later, a MN paranormal group comes to investigate the ND farmhouse where it all took place.  The movie starts out slowly but gives a great back story.  The paranormal group starts to investigate and eventually they become the target of terror and violence. The originality in the movie comes in the beginning and the ending with a fantastic balance.

SCREAM:   WHAT WAS INVOLVED IN THE PREPARATION FOR THE FILM?

Les:   We have been fortunate to have the very best cast and crew possible.  The committee/core group was formed consisting mostly of actual paranormal investigators who also acted as consultants on the set.  From there we brought in hair and make-up designers, wardrobe designers, prop managers, script supervisors, continuity directors, and so on.  Of course the Casting Call provided the right actors for each character.

SCREAM:   WERE YOU SATISFIED WITH THE WAY THE MOVIE WAS SHOT?

Les:  Yes!  The cameraman, boom operator and assistant director that I hired were second to none.  My Assistant Director has worked with me on almost every production.  When we are in the trenches, he holds it all together.  The hardest part about the actual shoot was that I needed the cameraman to shoot the movie right next to the actor that was supposedly recording the activity wearing a body-cam. When it came to the action shots, I was a little worried that they might collide because not only was the cameraman holding a big expensive camera, but he was also using a large heavy steady cam.   The actor was directly in back of the cameraman, but, he is rarely seen in the movie. 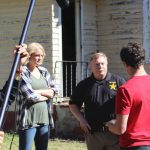 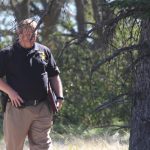 SCREAM:  WHERE WAS THE MOVIE SHOT?

Les:  The whole movie was shot south of a small town called Mcville, ND.  It was an old farmstead with a house and two farm buildings. We used the house for the interior and exterior shots for the movie.  We used one of the farm buildings for the hair and make-up designers, wardrobe props, briefings and craft services.  The other building was used for parking and hiding our cars from the shots.

SCREAM:    ARE  THERE ANY SPECIAL EFFECTS?

Les:  We had to shoot a lot of B-Roll to make the viewer aware that the camera in the movie was possessed.  I wanted a lot of options when it came to editing.  We incorporated some camera glitches and further into the movie we started getting more experimental.   During the climactic screens, we went crazy.

SCREAM:   WHAT WAS THE MARKETING STRATEGY FOR THE FILM?

Les:  The first thing I told my marketing team was, “We have a good product and it will sell, but it’s going to take some time and we’re going to have to go through the right channels”.   The second thing I told them was, “We can’t wait a long time for one specific entity to make up their mind because there is a very short window of time in this business from the time you’ve made the movie till the time it gets old”.   After all the hassle of trying to get a theatrical release we decided to go with the VOD platforms.  I majored in marketing in college, but I have to say the movie industry is a tough crowd.

SCREAM:   DO YOU FEEL THAT “EXSCIND” HAS BECOME A SUCCESS?
Les:  Absolutely!  We won “Best Horror Feature Film” last year at the New York City International Film Festival where the director of the festival described “Exscind” as a psychological thriller-style movie such as “Rosemary’s Baby” was.    “Exscind” also screened at the Marche’ Du Film Festival de Cannes in France.    We had a lot of interest from China and Japan but we couldn’t get the deal together with our agent at that time..  After that we had a huge world premiere and then went straight to VOD  such as Amazon and Fandangonow which supports an audience of 100 million worldwide.  We are very happy with the revenue share.

SCREAM:   WHAT HAS BEEN THE RESPONSE TO “EXSCIND” SO FAR?

Les:  It has been excellent.  I’ve had a lot of good comments and reviews.   We’ve had a few negative reviews, but like any movie that’s only one person’s opinion while the next person loves it and thinks it’s the scariest movie they have ever seen. For most people it’s a nail-biter. 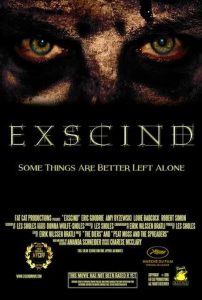 SCREAM:   DO YOU HAVE PLANS ON MAKING ANY MORE HORROR MOVIES?

Les:  Absolutely.  I’ve just completed a new script for a thriller and I’m currently looking for an investor as I move forward putting together my committee.

SCREAM:  THANKS SO MUCH FOR THE INTERVIEW AND GOD LUCK ON YOUR NEXT FEATURE FILM.

Les:  Thank you as well.

Check out www.exscindmovie.com for more info