Legendary Entertainment has picked up the rights to Devolution, the latest novel by Max Brooks (World War Z). 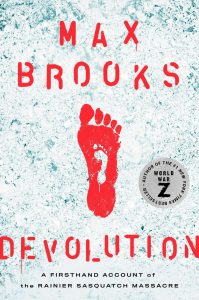 Described as part survival narrative, part bloody horror tale, and part scientific journey, Devolution is told through the eyes of Kate Holland, a resident of the model eco-community town in the shadow of Mount Rainier, whose journals shine a light on the massacre that occurred there. Detailing humanity’s defiance in the face of a dangerous predator, Kate’s account posits the impossible: that the beast known as Bigfoot truly walks among us—and that it’s a creature of terrible strength and ferocity.

Brooks previously planned to develop the concept for Legendary before deciding to write it as a book first.