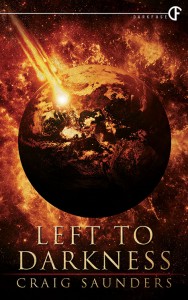 In Left to Darkness, Craig Saunders gives us his twisted vision of the pre, present and post-apocalyptic dream, or nightmare in this case. Where the world changes in the aftermath of a meteor strike and a whole bunch of characters from very different walks of life, fight to survive.

Set around London, the gridlocked M25, nice to know some things never change, even at the end of days, when the shit most definitely hits the fan and everything else in the vicinity, you still can’t get off that bloody ring road.

Frank Liebowicz is a big bastard who beats the fuck out of people for a living, we join him on one of those jobs as he commits a schoolboy error of epic proportion, his quarry, faceplanting concrete before a scrap of information can be pulled, job definitely not done.

‘On that note, Frank figured if he was going to fuck a job properly, there was no point in half-assing the bastard. So, he stamped as hard as he could on Johnny’s prone head, just in case. Big feet, hard boots, and 250 pounds, plus a lot of heart and soul.’

Dawn Graves, pregnant, sitting at home waiting for hubby, unfortunately he’s late and that’s because he’s having his wicked way with new girl Silvia in the works toilet. Robert Graves is about to wish he never ploughed this particular field and to cap it all, he’s about to lose his plough as big brother Sid intervenes in wickedly violent fashion. This is not the last we see of twisted siblings Sid and Silvia, they will be changed in the aftermath and not in a good way. Robby appears only briefly but his balls do swing merrily, as for his wife, she plays a vital role.

‘The new girl had one high-heeled shoe on the tiled floor, and one bare foot on the rim of the toilet, pushing her ass back against Robby and groaning, head hanging down, hair over her face. Robert’s balls were swinging back and forth merrily in the gap between her legs.  What the fuck was her name?’

And policeman Paul Deacon, drafted into the riot squad, sees at first hand the frenzied and insane brutality, as the world plunges into madness. He then meets two particularly barbaric individuals, a brother and sister, and torture will be the order of the day.

All these characters have parts to play in this new world, when the skies stay dark and the atmosphere is full of dust, when psychopaths come to the fore, a naked man smokes as if the cigarette has only just been invented. A man of power and magic, and a man who spins the wheel of this new world as he seeks the last child.

‘The smoking man wasn’t in the market for dying. Hadn’t been for a long time. He’d been… waiting? Dormant? The truth was frustrating for the smoking man, but best he could figure was that he’d been waiting a long, long time, in the wings. Now? Now it was his show.’

Craig Saunders writes with a style that is wickedly humorous yet dark and brutal, something to make you sit up and take note, danger, shock, then a laugh stifled. His stories literally snap, crackle and then burst from the page to slap you about the face, a true master of dark fiction who just cracks me up time after time. His characters are real, people you could imagine meeting, maybe having a drink with if you mixed in those circles, then maybe punching your lights out in a drunken argument, just because they could.

This is not God’s country, it’s the devils and Left to Darkness is the first book in the Oblivion trilogy, roll on the second.