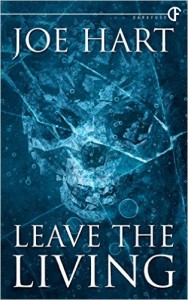 Leave the Living is a horror novella from Joe Hart and Darkfuse publications. Mickey Bannon is suffering, his ex-wife who he still loves is about to remarry, feelings are up in the air waiting for it all to end when the phone call comes that tells him his Father has died. Now he’s got to travel to his hometown as a harsh Minnesota winter threatens his journey and sort everything out, see his Father for the last time.

‘Mick froze, his foot dangling over the next step. The darkness was complete in its totality. Swimming afterimages left by the light danced before his eyes like capering spirit energy dissipating into some unseen dimension. His foot hovered over open air, and he pulled it back, sure that if he stepped down, there would be nothing there. He would fall into darkness, only the rushing wind in his ears and the sound of his own scream to accompany the plummet. The lights popped back on as if a switch had been thrown.’

When he arrives at his Father’s house things definitely take a turn down strange alley, and he starts to question his sanity as things, impossible things start to happen. Is his imagination bursting into overdrive or is there a message for him, a path he must travel to find both secrets and answers.

Now Leave the Living is very well written, this was my first read from Joe Hart and I have a feeling it won’t be my last, his writing is technically proficient and his prose is top notch. I noted loads of quotes I could have used in my review and that’s generally a good sign. The story was okay, not the best I’ve read but this author without doubt and with the right story will be an award winner, he is that good.

‘Mick let his air whistle out from between clenched teeth. In the theater of his mind, he saw the door flying open and some dark horror climbing out from inside, released from its prison by his own hand, eager and hungry.’