A trailer has landed for Aussie horror-thriller Lead Me Astray, which is said to be taking its cues from ‘70s and ‘80s genre flicks, most notably those in the Carpenter and Argento moulds.

Relying on a heavy atmosphere and synth-driven score, the film was shot by writer-director Tom Danger on a budget of less than $10,000. It stars Jace Pickard (Dead Moon Circus), Alannah Robertson, Tim Page, Addi Craig and Logan Webster. 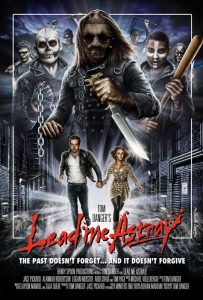 Synopsis:
The film follows a young veterinary student, Alexis Willard, as a single act of violence causes his life to come crashing down around him, putting the one person he loves in unspeakable danger as his mysterious past claws its way back into his present.

Along with the trailer comes this beautiful, 80s-styled poster art. Lead Me Astray premiered in Sydney back in October last year, and is expected to land on home viewing formats soon.