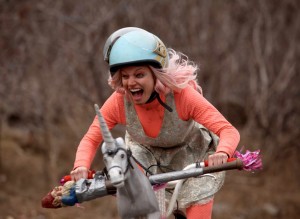 Today sees the UK home release of TURBO KID, the directorial debut of Anouk Whissell, François Simard and Yoann-Karl Whissell (aka RKSS). The trio, jokingly referred to by the film’s cast and crew as the three-headed dragon went all out, pushing their BMX pedals to the metal to provide an outrageous ode to the ’80s serving up a “slew of blood-soaked slaughter” (read our review here).

For me, the real rule of this roost is The Kid’s naive new sidekick Apple, played to perfection by Laurence Leboeuf. Whilst she comes across as being an absolute nutjob when we first meet her I assure you she’ll have you eating out of the palm of her hand by the end of the film.

SCREAM: It’s quite a funny story how you ended up playing Apple as a costume designer friend of yours happened to be friends with the directors.

Laurence Leboeuf: Exactly. He was working on a series that I was doing and he showed me this picture that François Simard had designed. It was a picture of me in my Apple helmet and makeup and stuff and as soon as he showed it to me I said, “What is this? I WANT IN!!!” 24 hours later I was reading the script and fell completely in love with it.

SCREAM: I think RKSS had been eager to work with you for some time beforehand?

Yeah. I was so extremely flattered and honoured that they trusted me with this because I’d never done anything like it before. I’ve never done comedy or even that kind of genre so for them to trust me based on what they’d seen with my career was a great mark of trust and respect. I was just all giddy in excitement because I love that world so I was very touched by that. 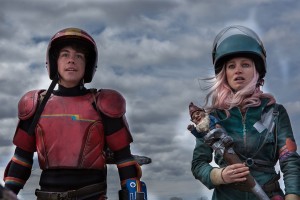 SCREAM: Apple is such a unique character who you can’t help falling in love with. What was it about the character that hooked you in?

I loved her complete naiveness of the world and her element of curiosity and joy was just so contagious. I loved the way they wrote all the humour. It was so pinpoint, you know? It was already so funny on paper that it gets you to feel attached to the character already. Then, on top of that you add the beautiful love story between Apple and The Kid and you just can’t help but get attached to the character.

SCREAM: Apple has a very unique outfit too. You have a retro Barbie in a boilersuit thing going on there. How much of a role did you have in choosing what you wore?

That was pretty much the wardrobe department. They had a pretty good idea of what they wanted and when we tried a couple of things it was that outfit that got a reaction out of me and out of them too. As soon as we saw it it was like, “Wow. That suit. That’s the one!” and all of a sudden Apple was born.

SCREAM: Like I said, Apple is a very peculiar individual. Were you ever concerned that people might not appreciate how bizarre she is and was it tough deciding how to get Apple just right in terms of your performance?

Definitely. That’s exactly what we talked with the directors about the first few times when we were meeting and reading the script out loud and during rehearsals. I told them that I’d never explored that kind of world and that kind of magic so I let them know that they’d have to tell me if it was way too much. They were the perfect guides in that sense and told me when to come back a little or they would pinpoint moments and tell me what was funny and what was not.

SCREAM: Whilst they were a big help in pointing you in the right direction I think they gave you a very long leash to mould Apple’s character to your liking too.

Yes, definitely. They were so creative with us so I felt like I was part of a creative process. Being able to improvise and create too, which makes you feel more free and that’s so liberating for an actor. So kudos to them because they made us part of their creative process. 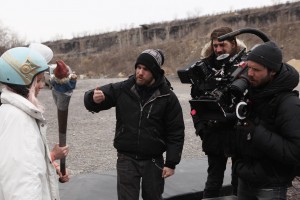 SCREAM: It’s not often we see films directed by three directors but it looks like the “three’s a crowd” saying didn’t apply here.

It was interesting [laughs]. At the beginning I was like, “Okay, you guys are three so how are we going to do this? Who do I talk to?” So it was said that Yoann would be the go to guy for questions from the cast and then Francois worked more with the crew and Anouk was kind of like the head of this three-headed dragon and they worked so well together. They’d worked together for years with that dynamic so they really created something that works for them and so it worked out so much easier than we expected.

SCREAM: So although Apple is very naive and childlike she is also about as kickass as they come. How much of the choreographed fighting did you do yourself?

I did all the scenes myself.

SCREAM: Ah, so they trained you in the ancient art of gnomestick?

Oh yes. I loooooooove my gnomestick!

SCREAM: In terms of the humour, whilst the film is very slapstick and tongue in cheek they also wanted to be very serious at the same time.

Yeah, definitely. I think that the beauty of the film is that there are a lot of things mixed in there: there’s drama, there’s comedy, there’s horror, there’s gore, there’s adventure, there’s science-fiction. It’s all this mix that makes it really unique and they managed to balance everything together so well. 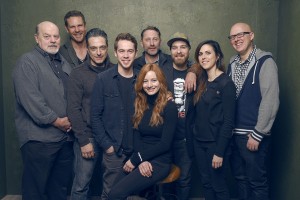 SCREAM: So what else have you got coming up after Turbo Kid?

We’ve gone back on set to film the third season of 19-2 so that’s great. Then I have a French series for Super Écran called Marche à l’ombre which is coming out in the fall so that’ll be great and then, other than that, we’ll see…

SCREAM: Thank you so much for speaking to SCREAM, Laurence.

My pleasure, Howard. Thank you so much.

We’d like to thank Laurence for talking to SCREAM and we can’t urge you enough to grab a copy of Turbo Kid out now on DVD and Blu-ray. The Blu version provides an extra helping of gore so that’s probably the one to go for. Also, for those of you heading to Sitges Film Festival you’d be foolish to miss this one and all three directors will be attending to answer your questions. Full Sitges Turbo Kid details can be found here