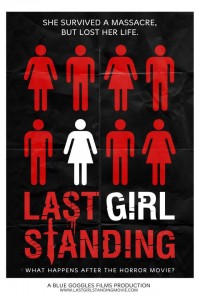 Synopsis:
After surviving a brutal massacre where she lost all her friends, Camryn (Akasha Villalobos) struggles to live a normal life as she tries to come to terms with her traumatic experience. She suspects that the killer is still alive, planning to return to finish where he left off.

Last Girl Standing has a very interesting concept as it promises to show us could happen after the credits roll on your favourite slasher film. Rather than following in the footsteps of Freddy, Jason and Michael Myers, this one begins where films like Friday 13th and Halloween start to end. We are thrown straight in as Camryn defeats the masked killer – who’s opted for a sinister deer-like get-up – and heads out on to the lonely road to be saved. Hurrah, it’s the happy ending she deserves! Not quite, because this is where the second round of horror starts. 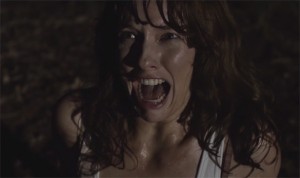 It’s easy to think that the horrors end when the final girl reaches safety, but as this film explores, the horror very much continues. Rather than being physically threatened, Camryn fights a psychological battle as she is plagued by recurring nightmares and hallucinations. After her trauma she struggles to lead an enjoyable life, preferring to stick to her own company in the fear that she will lose anyone she gets close to. The set-up is entirely different to your typical slasher, because Camryn is no longer the party girl we can assume she once was; gone is the make-up and desire to stand-out, and what replaces it is a plain individual filled with fear, paranoia and unhappiness, with no desire to draw attention to herself. Last Girl Standing paints a realistic and quite emotional portrait of the life after a slasher, showing that the reality of being the final girl is not as jovial as one would hope.

It becomes frustrating to watch as Camryn battles with her inner demons and despite Villalobos’ strong performance, she is an unlikeable character. This film desires to delve in to the psyche of its protagonist and draw the audience in to her emotional anxieties, but without an emotional connection to Camryn herself, it is difficult to associate and, in turn, care about her situation. Nonetheless, there is something to admire in the decision to delve in the psychological effects of, quite literally, going through hell and back. Perhaps as a comment on the state of the medical industry – which, considering the problems with the UK’s NHS and America’s constant call for changes within their health care sector, this is a relevant issue –  the real concern is with PTSD and the idea that Camryn hasn’t received appropriate help for her condition. Are people getting accurately treated for their medical issues? The Last Girl Standing would argue absolutely not. 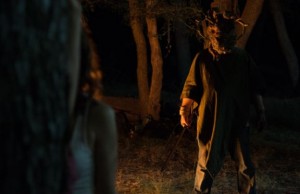 The presentation may be accurate, but there is something missing in Last Girl Standing that prevents it from fully embracing the potential within its undoubtedly great idea. This may have a great concept and a realistic execution, but there is a certain amount of entertainment value missing.  It shows that once you strip the blood, guts and gore from a traditional slasher, you’re left with something very real, but not really enjoyable. The majority of the film is spent being trapped inside Camryn’s paranoid mind and, as an audience, we are left to decide whether she is truly being stalked once again or if it’s all in her mind. As these are quite literally the only two routes the film can take, there is a lack of surprise in the film’s narrative. As we get closer and closer to the climax it becomes clear which one of these routes the film has chosen and, arguably, this is when the real fun starts. After a mediocre start, Last Girl Standing finally hits its stride during the second half which is when it borrows from Friday 13th Part 6 and sees Camryn head to the burial site of her tormenting killer. The final 20 minutes of the film are a bloody blast, allowing Last Girl Standing to draw to an intelligent and satisfying close.

Last Girl Standing is definitely worth a watch if you’re sick of stereotypical slashers and crave something new to get your teeth in to. It may be slightly predictable in places, but there’s still plenty to enjoy in this overall refreshing and intelligent semi-slasher flick that, at least, strives to put its own distinct stamp on the horror genre.