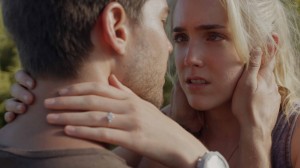 Synopsis:
Chris, Alicia and Daniel are three American tourists crossing a desolated landscape of European Georgia. One of them steps on an armed landmine and a psychopath takes advantage of tourist’s immobility.

127 Hours did it in 94 minutes and Buried did it in 95 minutes so when I first read the synopsis for Levan Bakhia’s thriller Landmine Goes Click I was curious to find out how he would flesh it out to its 110 minutes. After all, what could possibly keep audiences on edge in the same location for this period of time? The answer to this question is simple… Bakhia’s Landmine Goes Click takes the situational thriller and takes it one step further to make it one of the most shocking I’ve seen in quite some time.

Director Bakhia has crafted a film that seems simple at first glance but has so much more going on under the surface and this is part of its charm. The film follows three tourists. Spencer Locke and Dean Geyer play a newly engaged couple traversing the rural European Georgian wilderness with their best friend Chris (Sterling Knight). After a shocking discovery Chris unknowingly steps on an armed land mine leaving Alicia alone to find a way to save his life.

After a very long and drawn out set-up, which may become slightly worrying on a second viewing, Landmine Goes Click thrusts audiences into a situation that feels instantly claustrophobic. Bakhia doesn’t stop there, he makes the feeling even worse by taking the audience on a very tense and incredibly unnerving journey that I found utterly devastating. Like 127 Hours and Buried, Landmine doesn’t use blood to create chills and focuses on the desperation of the situation at hand and I think Bakhia did a fantastic job with this film.

As the two leads of the film, Knight and Locke both deliver a stellar performance. Both leads are likable, vulnerable and it was easy to care for them. As the film progresses the pair must work together to escape their predicament which is made even more dangerous by the appearance of local beekeeper Illya, played here by Kote Tolordava. In this role Tolordava is deeply unnerving, relentless and damn right scary. I found his character disgusting, slimy and I’m not afraid to admit that he sent chills down my spine. 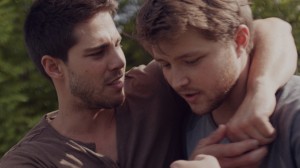 I do have a problem with the film or more specifically with the actions of one character in particular which results in the group being in the predicament. I thought this part of the set up was a little bit too far fetched and just plain insane. However, this aside, I really enjoyed the film because all the right elements were there. The film looked great on screen, the cast were great and their delivery was air-tight. As a whole, I found the entire film a really harrowing experience but in a good way and it is for this reason that Landmine Goes Click is worth the watch.