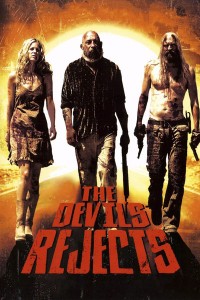 There is a long history of the Firefly clan running amok in the backwoods of Ruggsville, Texas. Considered by many to be the most brutal family of all time, the over 75 murders committed by the Firefly family have been documented and studied in an attempt to decipher the origin of evil. The first murders were uncovered in the 70s, after a group of young cheerleaders went missing, only to have their bodies discovered by a former police officer and two deputies at the family’s house, resulting in a bloody firefight.

Amongst the deformed and brutish family members, including Otis Driftwood, Mother Firefly, and Captain Spaulding there sashays one Lady Killer so beautiful and charming she’d have surely made prom queen if she’d ever gone to school. They call her Baby Firefly, and she’s a whole lot of nasty.

In 2003, Rob Zombie released his first feature horror film, House of 1000 Corpses. Critics panned the film, calling it everything from mean-spirited and exploitative, to disjointed and ugly. But while Zombie’s first foray into horror would widely be considered a flop, over the years it gained a cult following and the Firefly clan would return for two more films, The Devil’s Rejects (2005) and 3 From Hell (2019). 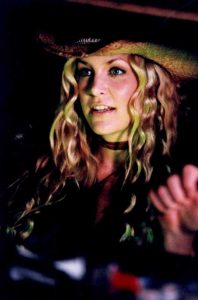 Baby Firefly is portrayed by Sheri Moon Zombie in all three films, with the character growing more nuanced and extreme with each new entry. In House of 1000 Corpses, Baby is all tits and giggles, she uses her body to lure her victims, and with how tiny Moon Zombie is, it’s easy to dismiss her as the weaker member of the clan. But what Baby lacks in strength she makes up for in piss, vinegar, and having a damn good time. She toys with her prey, letting them in on little secrets, letting them get real close to her so she can whisper in their ear – and even though it’s a good assumption that she probably smells something awful, some men can’t resist that stained smile – and, like a viper, she attacks. In The Devil’s Rejects, the character morphed into someone different, someone stronger willed and filled with rage. We see her loyalty to family as the Firefly clan are overwhelmed in a shootout in the first scene, and the audience is witness to the (dare I say) loving relationship she has with Otis (Bill Mosely) and Captain Spaulding (Sid Haig) as they carve their way through flesh and bone while on the run.

When the family takes a group of travelling musicians’ hostage, Baby’s brutality is unleashed on the women in the troupe. She holds them at gunpoint while Otis takes the men out to dig up guns in the desert. When at one point Baby is overtaken by one of the women, Baby taunts her, screaming “Shoot me! Shoot me right in the ass!” before throwing her knife right into the woman’s sternum. She shouts with glee, “Ain’t no bullets in this thing. It’s all about fucking mind power.”

And so it is with Baby Firefly. She knows how easily she could be overpowered, and so her strategy lies in messing with her victim’s minds. She burrows into their heads, lowering their guard with her pretty smile and sexy strut, using the very thing that has likely been used against her to her advantage. If you let a snake get close enough, don’t be surprised when it strikes. And when Baby strikes, she does so with her whole body. She tortures, stabs, shoots, and crossbows her way through her victims, laughing every second of the way, building up her appetite for that tutti-fucking-fruitty. 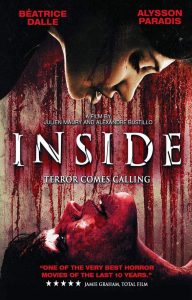 Far and away, in a far darker and rainier part of the world, another predator lurks in the shadows. She is a lone Lady Killer, quiet and brooding.

On Christmas Eve in a desolate neighbourhood in France, Sarah (Alysson Paradis) awaits the birth of her child, her labor set to be induced the following morning. Sarah is alone, having lost her husband in a horrible car crash. She is despondent, bitter, and overall apathetic about the impending birth.

A knock on the door in the middle of the night. A woman’s voice, deep and cultured, asks Sarah if she can use her phone. Please. My car broke down. Sarah refuses, practicing a level of vigilance that women are often taught as girls. The voice becomes more insistent. Sarah says her husband is asleep. But the woman says she knows her husband isn’t asleep – she knows that he is dead.

Thus begins the night of dread depicted in 2007s New French Extremity horror film Inside from Julien Maury and Alexandre Bustillo. La Femme (Beatrice Dalle) is a woman shrouded in black. Her face is hidden in the darkness, illuminated at first only by a mellow flame as she lights a cigarette. Sarah sees her this way first through a large glass door. La Femme’s eyes glower in the fire, steadied on Sarah, on her bulging belly.

Sarah calls the police, who are overwhelmed due to massive riots in the city, but a few are dispatched to her after she tells them she is pregnant. The police wander through the house and outside, leaving the door open a crack as they make their rounds, a crack just big enough for a rat to slip in.

La Femme watches Sarah as she knits, unassuming and unaware of eyes on her back. She floats ethereally through the house, following Sarah upstairs, watching her sleep.

While Baby Firefly is a beacon of chaos and malcontent, Le Femme is patient and still, practically lifeless as she brandishes an enormous pair of scissors and snips the tip of Sarah’s belly button, pressing deeper before Sarah awakens in terror. La Femme is knocked away just long enough for Sarah to lock herself in the bathroom, confused and screaming.

As victims arrive at Sarah’s doorstep, La Femme dispatches them with cunning ease. Using her wiles, she seduces Sarah’s boss, who has stopped by to check in, convincing him that she is Sarah’s mother, before Sarah’s actual mother shows up, giving up her game. La Femme stabs the man in the knee, then the genitals, before repeatedly slashing and gouging his face with the scissors and finally viciously slashing his throat.

It does not bother La Femme to hear the angst in Sarah’s wails, and as it is soon revealed, La Femme will go through any body in her way to get what she wants – Sarah’s unborn baby.

The carnage left at this one scene, inside Sarah’s house, may be isolated, while Baby Firefly moves across the country leaving corpses in her wake, but when comparing these two Lady Killers, more than just the body count should be considered.

Baby is impatient and impulsive, acting out of psychotic abandon. Her hatred isn’t pointed, but splays like buckshot, penetrating anyone who happens to be nearby. La Femme is more primal. She moves with intent, with purpose, utilising the cover of darkness to slip into the house without alerting her prey.

Unlike La Femme, Baby’s motives are obtuse. She sees someone, she doesn’t like them, maybe she does like them, and she feels the right to kill. She shouts out a kid’s nursery rhyme whilst running after a victim that got away. For Baby, murder is fun. For La Femme, murder is the necessary evil to get her what she wants, what she needs. With La Femme’s motivation, there is no one who can stop her. She is driven by grief and sorrow, strengthened by the knowledge that she deserves to be a mother, and that Sarah deserves to have her baby – and her life – stolen from her. If there were a noble excuse for murder, La Femme believes she has it.

It is safe to say that if Baby Firefly showed up on that French bungalow doorstep, La Femme would have made quick work of her.

Baby’s ego and erratic behaviour are highlighted in House of 1000 Corpses and the beginning half of The Devil’s Rejects, but her character arc switches to see Baby become a victim in the second half, almost deserving of the audience’s empathy. As she, Otis, and Captain Spalding are held and tortured by the brother of one of their victims, the narrative shifts enough to make the audience feel at least a little bit sorry for the pathetic trio. Betrayed by their low-life friend, they are shoved onto the other side of the fence, instead of the predators, they are the prey.

There is a point during Inside where La Femme no longer has the upper hand, but it comes only after Sarah has threatened to stab her own stomach as a threat to the baby who she finally realizes La Femme is after. This moment changes the way the audience sees Sarah, she is no longer fighting for her baby’s life but her own, and we are trained to expect mothers to do anything for their offspring. In this moment, La Femme swings a toaster into Sarah’s face, stripping her of her only leverage, and even though the villain is back on top, the audience may breathe a sigh of relief knowing that the baby is safe. It is this turn in the film that shows exactly who the real mother bear is – La Femme – and when the crisis concludes on a blood-soaked staircase, it is terrible to admit but hard to deny that the right woman may have won, if only for the good of the baby.

In Zombie’s Firefly trilogy as well as in Inside, there is no doubt that these Lady Killers are beautiful, brutal, and unforgiving. But La Femme, unlike Baby, would likely have gone an entirely different way in her life if some events had never happened. Nature has caused La Femme to turn, but she does not take pleasure in the terror she inflicts. Baby, on the other hand, likely came out of the womb chewing on her cord. Ultimately, in a battle between the two, Baby Firefly may get close enough to strike, and she’d definitely leave a mark, but if La Femme maintained her Machiavellian restraint, she would ultimately defeat the villainess in the bloodiest of battles.