Synopsis:
After being put on trial for the genocidal massacre of thousands of native Mayans, an ageing and paranoid former Guatemalan dictator shelters in his opulent home with his wife, daughter, and granddaughter. Of the domestic staff, only one loyal housekeeper remains… That is, until a mysterious young maid arrives at the family’s door. 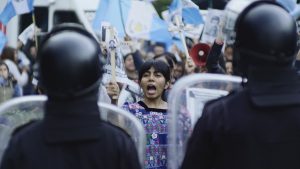 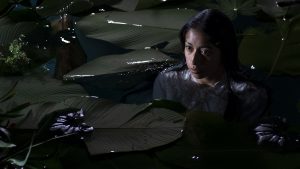 Most horror fans are familiar with La Llorona, aka the Weeping Woman, a figure from Latin American folklore who is said to have drowned her own children before drowning herself, causing her spirit to restlessly roam the earth. Just last year, she was the subject of Michael Chaves’ The Curse of La Llorona, part of The Conjuring Universe. That film was loud and full of jumpscares, as is to be expected from Conjuring spin-offs at this point. Director Jayro Bustamante’s new interpretation of the legend is anything but, telling an eerily quiet and emotionally resonant story about oppression, those who benefit from it, and the devastating ripples it creates.

Despite the plot revolving around the crimes of retired general Enrique (Julio Diaz), he is not the focus of the narrative. Rather, Bustamante and Lisandro Sanchez’s script explores how his actions have impacted the women around him—both the Indigenous women whose lives he directly ruined, and his own family.

This is best exemplified in the character of Carmen (played by a pitch-perfect Margarita Kénefic), the general’s wife, who undergoes the biggest transformation throughout the film. Despite her initial contempt for the whole affair and her dismissive assertion that “what’s in the past, is in the past,” it gradually becomes clear that she clings to old grudges—and that her lack of empathy towards the Indigenous women is largely born from her anger at her husband’s infidelity.

While their daughter Natalie (Sabrina De La Hoz) initially seems more critical of Enrique’s actions, the film does not absolve her of guilt. She clearly benefits from the family’s wealth and seems unwilling to have the difficult conversations with her own daughter Sara (Ayla-Elea Hurtado) about what has happened and why it matters. This is evident in an early scene in which she lets the question hang after Sara asks why people on the internet say bad things about her grandpa. Later, Natalie tells Carmen she needs to relax while doing yoga in the family’s expansive grounds, seemingly oblivious of—or wilfully deaf to—the furious chanting of the protestors beyond the exterior walls. 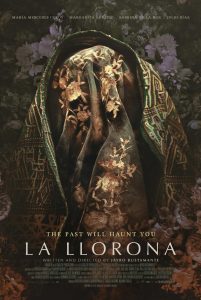 These outspoken yet quietly complicit women are contrasted with the figure of Alma (María Mercedes Coroy), who becomes a silent reminder of a past that can’t be buried as she moves through the family’s most intimate spaces. Bustamante suggests rather than outright confirms whether Alma is a supernatural presence, utilising the character’s flowing hair and steady, accusatory gaze to great effect. Nicolás Wong’s cinematography further imbues the film with a haunted ambience, even when no ghostly wails can be heard. An air of gloom air hangs over the mansion, its colours somewhat muted and the daylight never quite getting in.

For all its wordless rage and aching sorrow, La Llorona doesn’t quite end up where it needs to be. Some of the characters’ arcs don’t feel fully developed, and the climax is a little too easy to be truly satisfying. But perhaps that’s partially the point. Real-life tragedies like this rarely have a satisfying ending.

All we’re left with are our tears.