Kurt Sutter’s The Bastard Executioner may have been prematurely cancelled, but the Sons of Anarchy mastermind is never one to sit still for long, and it looks like he’s shifting his focus from the screen to the page. As announced at Wondercon 2016 over the weekend, Sutter is collaborating with writer Caitlin Kittredge (Coffin Hill) on a supernatural comic series entitled Lucas Stand for Boom! Studios. 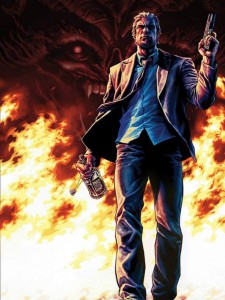 Written by Sutter and Kittredge with art by Jesús Hervás, Lucas Stand tells the tale of “a former special-ops soldier who’s seen and done heinous things. Returning home, he’s cut himself off from society and family. Carrying that burden becomes too much for him, so he tries to put a bullet in his head. Instead of dying though, he’s spared by the dark angel Gadriel, who tells him the balance of heaven and hell is out of whack because too many demons have escaped. So Gadriel makes Lucas a deal: For every demon he kills, thereby saving a soul, he gets one of his own sins taken away so he can be redeemed and move on.”

Sutter says that Lucas Stand is “the darkest antihero or hero I’ve ever created”; quite a claim given his track record. Talking to USA Today, Sutter explains: “Over the course of mankind, mortals who were technically not evil people and weren’t supposed to land in hell have been corrupted so much by the way we’ve learned to live, and the temptations and the greed and the opulence of our lifestyles have turned the people who were supposed to be on a more altruistic path to the dark side.”