Kristen Stewart Talks to the Dead in Personal Shopper Teaser

With the Kristen Stewart-starring spook story Personal Shopper looking at a March release date, distributors IFC Films have put out this chilly teaser.

Despite playing to a mixed reception at Cannes this year, the film has picked up some favourable reviews from reputable sources. It is directed by Olivier Assayas (Demonlover), who said after the Cannes screening: “It happens to me once in a while, where people just don’t get the ending. When you come to Cannes, you have to be prepared for everything.” Stewart also slammed down the more sensational reports, saying, “Everybody did not boo. Let’s be clear.” 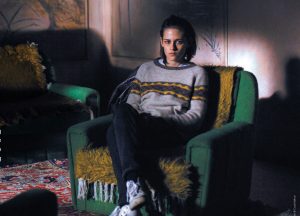 The official word describes Personal Shopper as an “…ethereal and mysterious ghost story starring Kristen Stewart as a high-fashion personal shopper to the stars who is also a spiritual medium. Grieving the recent death of her twin brother, she haunts his Paris home, determined to make contact with him.”

Expect mystery and chills, though perhaps not a crowd-pleasing ending when Personal Shopper hits US cinemas on March 10th, 2017.