Synopsis:
A government sponsored group of ‘surveyors’ travel to Skull Island to investigate bizarre eco-system readings. Once there, they awaken, and are forced into battle with, an army of aggravated monsters and the giant, mythical ape that rules them. 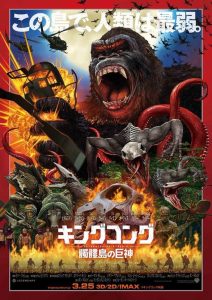 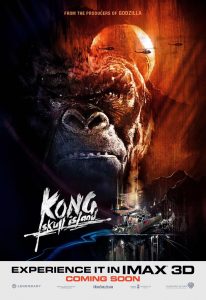 The timeless King Kong concept continues to fire both film-makers’ and cinema goers’ imaginations eighty years after the original Merian Cooper feature. Despite some stinky spin offs and re-jigs over the years (King Kong Escapes, King Kong (76) and King Kong Lives), the 2005 Pete Jackson remake restored faith in the great ape, and this latest incarnation is an equally laudable and immense re-imagining. Its 1944 set prelude drops a key character onto Skull Island (somewhere in the South Pacific) before a news-reel opening credit sequence, similar to Warner’s recent Godzilla, charts the passing of time up to when the story reconvenes in 1973, Washington: during the Vietnam war and Nixon’s Watergate hoodwinking. Ironic cross-referencing to modern politics and a tasty rock soundtrack (Led Zeppelin, Black Sabbath, Van Morrison, Bowie) inform Kong: Skull Island with arresting, era setting realism to a much better extent than the recent X-Men sequels managed. 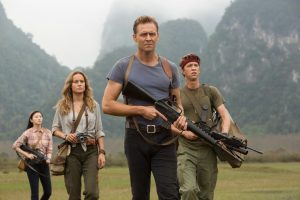 Crackpot scientist Bill Randa (John Goodman) specialises in “the hunt for massive, unidentified, terrestrial organisms” and approaches a pensive Senator in hope of securing financial backing for an expedition to Skull Island: “a place where myths and science meet”. Randa’s fact based claims of irregular ecological activity (even an aerial view of the landmass looks like a snarling imp), sees his mission glibly green-lit. Randa then recruits a motley crew of military meat-heads led by Samuel L. Jackson’s battle hungry Lieutenant Colonel Packard. Ex Special-Forces tracker Captain James Conrad (Tom Hiddleston/ in Bond audition mode) joins the troupe, along with “anti-war photographer” Mason Weaver (Brie Larson) and the team are swiftly deployed (via chopper) to the island.

Upon arrival they are met with immediate hostility and it’s not long before Kong turns up and starts tossing choppers at the sunset. Militias and machinery rain from the sky against a backdrop of ape hair and hellfire as Kong pops pilots like paracetamols while casually swatting helicopters. The photo-real beast is a ground-breaking effects leap and a far cry from the twitching toon hairballs of Twilight and An American Werewolf in Paris. Rookie director Jordan Vogt-Roberts (The Kings of Summer) unveils surreal visuals, salty horror and sweltering action with finesse. Gliding the camera down the behemoths’ throats to tickles their oesophagus’ and through war-torn battlefields with a proclivity for desert beige and vivacious jungle greens. The crew trek through Skull Island’s desolate landscapes where scrawny giant spiders, tentacle flailing sea monsters and over-sized obnoxious budgies bejewel the backdrop while a finale adorned with poignancy and military vigour closes the film fittingly.

The weakest creatures, in terms of design, take the form of the lazily scrawled “skull crawlers”: the sworn enemy of Kong which skulk beneath the island’s surface and are stirred from dormancy by Packard’s test bombs. Other design flaws are a slightly slack narrative, wonky dialogue and some flaccid jokes but subtler gags hit their marks and some trigger big belly laughs. A blossoming romance between Hiddleston’s Conrad and Larson’s Weaver feels slightly superfluous. Sam Jackson’s Packard gets locked into a psychological showdown with Kong during which he opts to get immediately medieval on his ass while spitting axioms such as: “I am the Cavalry!”, flaunting a perpetual war face and growing anxious to the point where he’s shooting innocent birds and turning rocket launchers on butterflies.

The clan encounter a local tribe who never smile led by stranded pilot Hank Marlin (John C. Reilly): a “crazy Santa Claus time travelling guy from WW2” who becomes their island guide. Packard suggests returning to the war zone for mislaid weapons and a lost crew member while the others run for their lives. This supplementary rift leads to refreshing dramatic conflict/ revelations which allow for more emotional investment throughout the latter half. Tasty gore takes the form of exuberant blood-jets/ splats, monster masticating, mouth pulverising spikes and bodacious limb ripping against burnt orange sun-sets. These provide a rich beauty to festoon the suspense amidst the escape/ war plot. One scene featuring a tentacle coiling, amphibian quadruped throwing up human remains is a particularly memorable (albeit brief) moment. 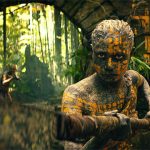 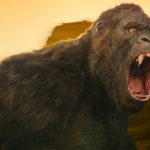 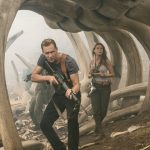 Films such as: Jurassic Park, Predator, Apocalypse Now and Indiana Jones and the Temple of Doom, spring to mind while watching Kong: Skull Island, more so than any of the previous Kong features. This suggests Vogt-Roberts succeeds in crafting an unique monster movie, different to the previous ape capers. Kong: Skull Island is an unruly incarnation, simmering with anti-war allegories, spectacular action with jaw-dropping behemoths, retina scalding visuals, gnarly horror and cutting-edge effects with a thudding/ perfunctory plot/ pace and electrifying set-pieces. Its melting pot of off-kilter imagery, brusque action and slapdash comedy makes for a weird concoction which may be alienating to some viewers, but within its inconsistencies resides one of the most compelling mainstream/ popcorn features to grace our screens in some time. It’s certainly the best monster movie in years. With confirmation from a key character that Kong is getting bigger(!) and Vera Lynn’s We’ll Meet Again gilding a penultimate montage, a grander battle with Vogt-Roberts’ beast is undoubtedly on the cards.