Kino Lorber will Let The Corpses Tan! next Summer

The co-directors behind 2009’s stunning giallo-inspired arthouse nightmare Amer and follow-up The Strange Color of Your Body’s Tears, Cattet and Forzani look to be tackling the Eurocrime genre with their latest, which was adapted from Jean-Patrick Manchette and Jean-Pierre Bastid’s 1971 crime novel. The film stars Elina Löwensohn (Dark Water, A Very Long Engagement), Stéphane Ferrara (Paprika) and Bernie Bonvoisin. 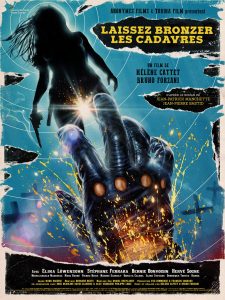 Kino Lorber is looking to release the film theatrically next summer, followed by a launch on SVOD, VOD and physical media in the autumn.

The film’s next stop is at the upcoming London Film Festival on October 8th.