“How does a person cope with the unbelievable?”

That’s the question Stephen King poses in a new featurette for The Outsider, HBO’s upcoming limited series adaptation of his 2018 novel of the same name. 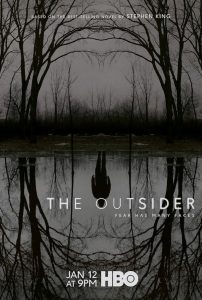 Centering around the horrific murder of an 11-year-old boy, The Outsider sees Terry Maitland (Jason Bateman), a beloved figure in the local community, being arrested publicly for the crime⁠. The evidence against him is rock solid. Trouble is, so’s his alibi.

At a loss to explain the inexplicable events, Detective Ralph Anderson turns to unconventional private investigator Holly Gibney for help. But the truth may be stranger—and more horrific—than fiction…

In the featurette, stars Ben Menelsohn and Cynthia Erivo, who play Anderson and Gibney respectively, share their thoughts on their characters. Richard Price, the show’s writer and executive producer, also discusses what drew him to the material, saying he loved the way the novel felt like a criminal procedural.

“You couldn’t ask for a better adapter,” King says of Price.

The Outsider premieres on January 12th, 2020. Check out the new featurette below: