Stephen King talks about his excitement at seeing Roland ‘The Gunslinger’ Deschain realised onscreen in this short new featurette for the upcoming The Dark Tower film. Idris Elba also discusses his leading role, while Matthew McConaughey comments on his antagonist, The Man in Black.

The highly anticipated (and several times delayed) adaptation of Stephen King’s books is due to hit screens on August 4th, and also stars Fran Kranz, Abbey Lee, Jackie Earle Haley and Katheryn Winnick, under the direction of The Girl with the Dragon Tattoo scripter Nikolaj Arcel. Ron Howard and Brian Grazer are producing the film under their Imagine Entertainment banner, together with Stephen King and Erica Huggins.

Rather than directly following the stories laid out in one or all of King’s Dark Tower books, the film is something of an amalgamation/continuation of The Gunslinger’s journey, walking its own path within the book series’ universe.

The recent full trailer for The Dark Tower contained nods to both The Shining and It, kicking off the multiple tie-ins we can expect to see in numerous upcoming adaptations of the author’s work. Suffice to say, this could be the beginning of the most exciting cinematic ‘expanded universe’ yet. 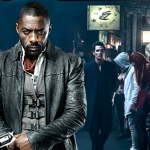 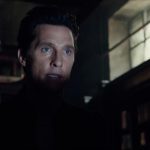 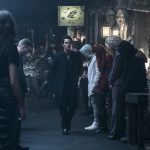 “There are other worlds than these. Stephen King’s The Dark Tower, the ambitious and expansive story from one of the world’s most celebrated authors, makes its launch to the big screen. The last Gunslinger, Roland Deschain (Elba), has been locked in an eternal battle with Walter O’Dim, also known as the Man in Black (McConaughey), determined to prevent him from toppling the Dark Tower, which holds the universe together. With the fate of the worlds at stake, good and evil will collide in the ultimate battle as only Roland can defend the Tower from the Man in Black.”