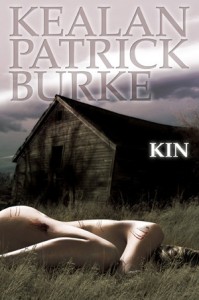 Not for the faint hearted Kin is an emotional gut wrenching ride into the minds of the abused, those seeking retribution and a cannibalistic redneck family that hunt and kill people. You won’t find more of a hard hitting, brutal and compelling opening than the image of Claire, severely tortured both mentally and physically, running for her life, running from the Merrill clan.

Claire and her three friends were hiking through the backwoods town of Elkwood when they were stalked and attacked by the Merrill family, a twisted family driven by God to hunt and kill. A truly terrifying experience that will change her life forever.The first third of the book deals with the escape, those who assist and the Merrill family cleaning house. Multiple POV characters are used which enhances the all-round feeling of dread as we see through the eyes of the hunted and the eyes of various members of the killer family. This section is harrowing and disturbing, peppered with shocking violence and malevolence.

Kin is not just about the abused, it’s also about a family of killers, children bred to kill by parents who in their own right are fearsome individuals. The mother is bed-ridden referred to as Mama-in-bed and she leaves a big impression, not just on the soiled sheets she never leaves but you can feel the atmosphere of that room, the stink of that room and it stays with you. Papa-in-gray is a predator, his introduction is strung out till last to build the tension, feared by all he is first seen wearing an apron of skin, carrying a severed head and he’s the man responsible for this family.

Finch is an Iraqi veteran and brother of one of those killed by the Merrill’s, when they escape the clutches of the law only he can deliver retribution and revenge will be his.

Kin in parts is terrifying and it’s one of those books you can’t put down, I finished it in just over a day, if you want to read a truly believable and gripping portrayal of evil then I recommend this. Published in 2011 and rightfully described as a modern day horror classic, the follow up to Kin is to be released later in 2015 and is definitely one to look out for.