A bloody fabulous trailer has been unleashed for the slasher-comedy Tragedy Girls, which has been described as Scream meets Heathers for the Instagram age. The trailer delivers gore, laughs and lashings of intelligence as it shows two young women resorting to killing for social media fame. It looks epic. 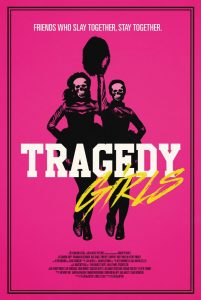 Synopsis:
Best friends Sadie and McKayla are on a mission to boost their social media fandom as amateur crime reporters hot on the trail of a deranged local serial killer. After they manage to capture the killer and secretly hold him hostage, they realize the best way to get scoops on future victims would be to, you know, murder people themselves. As the @TragedyGirls become an overnight sensation and panic grips their small town, can their friendship survive the strain of national stardom? Will they get caught? Will their accounts get verified?

Tragedy Girls was a hit at the recent Horror Channel FrightFest in London and has garnered a lot of acclaim since screening at Fantasia Festival, South by Southwest and the Melbourne International Film Festival, too. It’s certainly been a hit with the festival market and we’re sure that general audiences are sure to love the film’s combination of the comic and the horrific.

Tragedy Girls has been directed by Tyler MacIntyre (Flicker, Patchwork) and stars Alexandra Shipp, Nicky Whelan, Austin Abrams, Brianna Hildebrand, Kevin Duran and Josh Hutcherson. You can catch the film in the USA when it is released in cinemas on 20th October 2017.